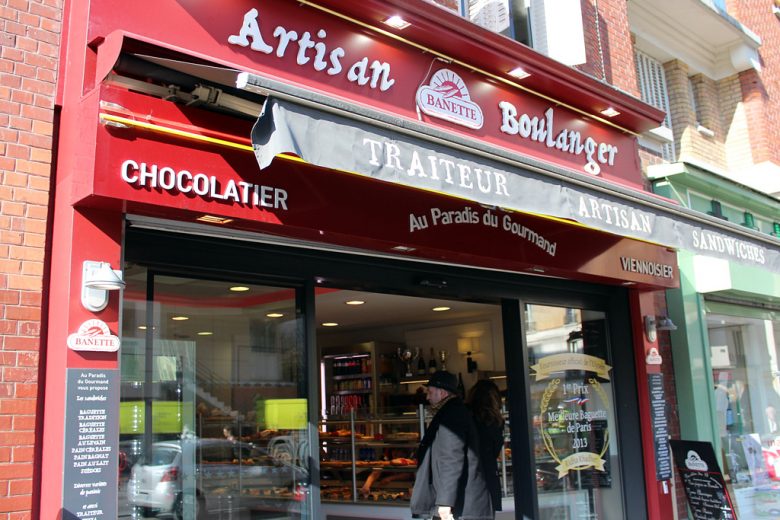 That was my second place of pilgrimage in Paris, the “Au Paradis du Gourmand” (paradise for those with a sweet tooth). In 2013, Ridha Khadher won the annual competition for the best baguette. Whoever wins this competition is allowed to supply the French President for a whole year.

If some magazines are to be believed, Ridha relies on a cold bulk fermentation. 60kg flour (Banette brand) are kneaded with 41 liters of water, a certain amount of yeast and sea salt (1.8%) and then stored at 6 ° C for 24 hours. Before working up, the dough matures for another half an hour at room temperature. The baguette is baked at 250 ° C for 22 minutes. The use of the machine is limited to kneading and dividing, the rest is done by hand with his three bakers.

The recipe that led Ridha Khader to victory came in part from his mother in Tunisia. His mother only used sourdough that matured for 48 hours. Like his mother, he only uses 1-2g yeast per kilo of dough.

When we entered his shop, the small shop was occupied by four people to sell. If you also know that up to 1500 baguettes leave the little paradise in one day, then this is very impressive.

What impressed me most personally was the range that was on sale. No matter whether it was brioche, snacks, pralines or pastries, everything was worthy of a presidential baker. One looks in vain for such bakeries in Paris, and I was not alone in this opinion.

This quality doesn’t come from anywhere! The first baking starts at 2 a.m. and the oven is not switched off again until 8 p.m., because that’s when the last baguettes leave the bakery. For me, this baker was number 1 in Paris!