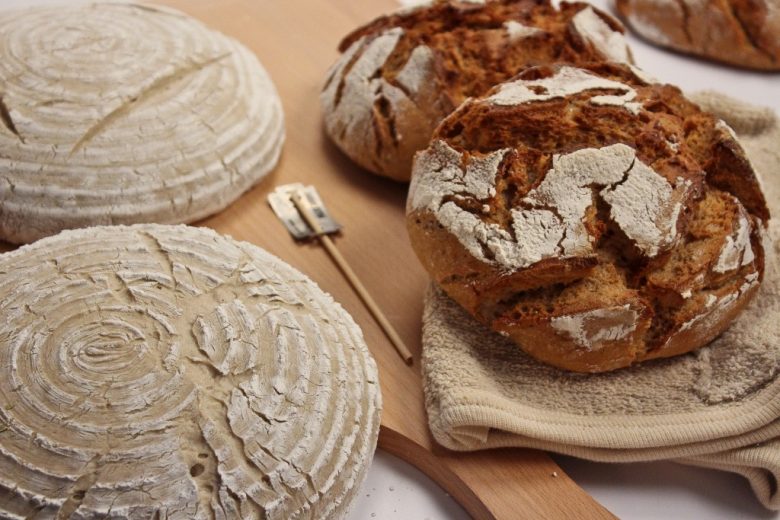 The task of baking is to transform the dough into wholesome, tasty bread and baked goods. At the end of baking, the following criteria should be met, depending on the type of bread:

Preparing the bread for the baking process has a major impact on the end product. The bread is placed on a baking peel, scores, dimpled, sprinkled, coated, dusted and reshaped. The proof, the dough structure, the dough surface and the baking atmosphere are also decisive.

The determination of the baking temperature and the baking time depends on the recipe, the hydration, the size of the dough and the shape. There is no exact temperature in my blog because the temperature varies depending on the type of oven.

Unfortunately, in many household ovens, the specified temperatures are not correct. Deviations of up to thirty degrees are quite common. I therefore recommend buying a heat-resistant thermometer and mounting it in the oven. This allows you to constantly monitor the temperature.

Many types of bread are scored on the top before baking. The purpose of this is that the excess pressure that develops in the dough is diverted in a targeted manner during baking. You could also say that the scoring takes on the function of a pressure relief valve.

Wheat dough is scored once 3/4 proofed and baked immediately afterwards. Fully proofed loaves of bread result in an unattractive formation after scoring, because the increase in volume during baking is less. Only sharp knives should be used to score the bread, but razor blades are also very popular in practice.

Most breads require a sufficiently moist baking atmosphere for optimal oven spring. The amount of steam fed into the baking chamber immediately moves to the coolest place, the surface of the dough. When it cools down, condensation forms, which means that the surface of the dough remains flexible and can give way to the pressure of the fermentation gases. The excess steam should be let out after the bread has risen to ensure a well-baked, crispy crust.

The characteristic appearance of some types of bread results from the interplay of several or individual factors:

In contrast to the surface of the dough, the heat from the oven penetrates the inside of the dough more slowly. The temperature there reaches at most the boiling point of water. Often this is not even achieved even though the bread is completely baked. The gelatinization temperature of wheat starch and rye starch is not identical.

What does the gelatinization of starch even mean?

When the temperature increases (55-90°C) the starch changes in the following ways:

The crust begins to form even before the oven spring. As the outer layer of dough dries out, a tender to crispy crust is created, depending on the recipe.

In a normally heated oven, the crust temperature is 150-180°C. Because the heat is not transmitted everywhere at the same time, the coloring is strongest on the bottom and on the top.

When is a bread finished baking ?

The needle test:  You prick the -probably- well-baked bread with a knitting needle. If no dough remains stuck to the needle, the bread is baked through.

The knock test: Tap the bottom of the – presumably – finished bread. If it sounds hollow, the baking process is over.