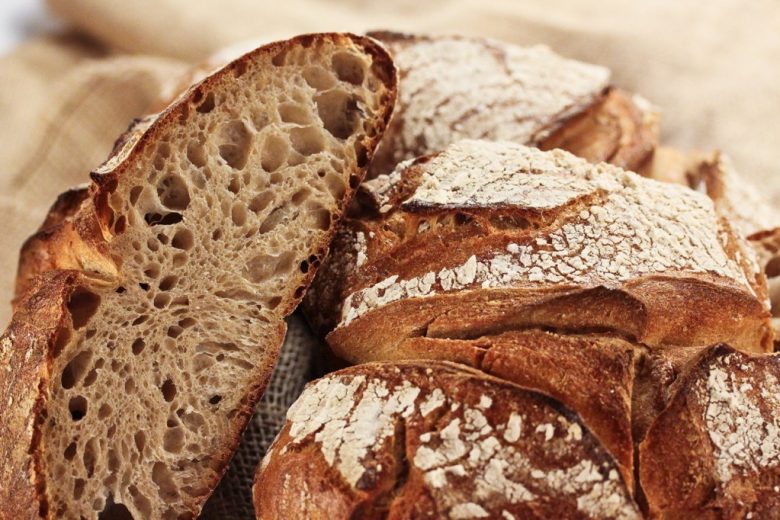 I learned about the Charpentier in France. The form, as well as the taste, caught my attention early on. The beautifully colored, light crumb is permeated by rich aromas and the crust is also characterized by a long-lasting crispness. Diese schön gefärbte, lichte Krume ist durchzogen von vielen Aromastoffen und auch die Kruste zeichnet sich durch eine langanhaltende Rösche aus.

Stored in the bread box and then baked again the next day at 250°C for 5 minutes, you can hardly tell the difference (in fact- it might actually be better). Both the sourdough and the main dough were constructed with T80 flour.

Although the hydration level of 180 for the recipe might seem daunting to some, the work up is made all the easier. After kneading, the dough is given a 150 minute maturity time and during which it is turned (folded) 3 times, every 50 minutes.

After this, the dough is stored in the refrigerator at 4°C for 12-15 hours. During this time the dough develops a huge amount of flavor that cannot be compared with any other French bread- not even the Tourte de Meule.

On the baking day, the dough is simply turned out of the tub and cut into 6 equal sized pieces with a spatula. The cut dough pieces are now placed as groups of 3 in a proofing baskets. The dough pieces now proof for 50-70 minutes in the proofing baskets before they are baked in the oven at 250°C with strong steam.

Stir together sourdough, water -1 and flour until lump-free and let autolyse for 30 minutes. After the autolysis phase, the salt and yeast are added, then kneaded slowly for 10 minutes.

Just when the fast mixing begins, the water-2 is added in small drops.  It is kneaded at a fast speed until all of the water is mixed in (if you dare not approach the hydration of 180, some water can be held back). While the machine is running everything may still look ok, but this will change when the machine is turned off.

Immediately after mixing the dough is placed in an oiled tub and folded three times each after 50 minutes. With the course of folds the dough takes on some stability and it is really fascinating to observe. After the 150 minute dough development, the dough is stored in the refrigerator for 12-15 hours.

After the observed 12 hours the dough is floured in the tub and turned out onto a work surface. Now dust two proofing baskets with flour. Form the dough that is already on the work surface, cut out the desired dough sizes with a dough spatula and place in the proofing basket. The total amount of dough should be divided between the 2 proofing baskets and take care to maintain as much of the volume in the dough as possible.

Depending on how carefully the dough was handled, the dough will now proof in the baskets for between 45-70 minutes. Bake the bread at  250°C reducing to  235°C about  30-35 minutes (bake until wee browned). The steam can be let out towards the end of the baking time.