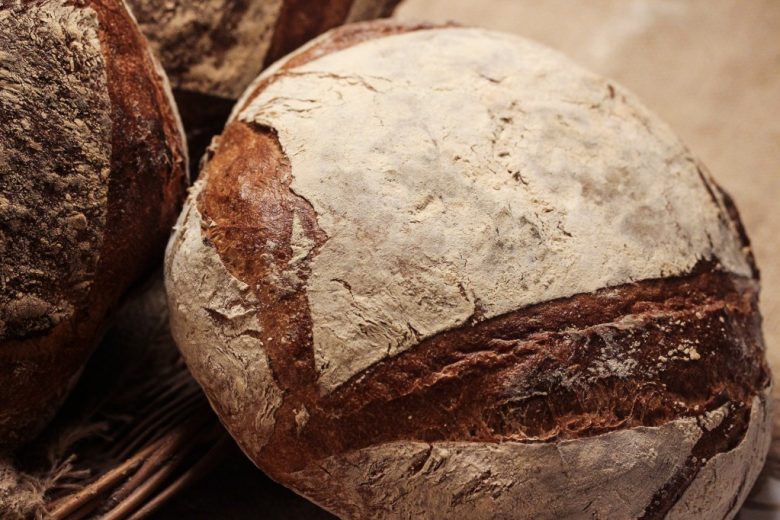 Since ancient times, the surface of the bread is scored or cut before baking for many breads. Once baked, these score lines lend the bread a typical look. The technical purpose of this is to divert the excess pressure that develops during baking in a more controlled manner. The incision takes on the function of a pressure relief valve. This avoids cracks in the crust and prevents cavities from forming directly under the crust. Both can also be avoided by “dimpling”. Dimpling means piercing the surface with a skewer or a fork. This creates holes approx. 1 cm deep in the bread surface, from which the pressure can escape.

Sometimes it is even advantageous to moisten the dough before dimpling or scoring so that the shape can develop well. However, there are also many bakers who first cut and then moisten, because they are not so concerned with the perfect shape.

Wheat dough is scored once 3/4 proofed and baked immediately afterwards. Fully proofed dough pieces result in an unattractive shape after scoring because there is less volume increase during the baking process.

Only very sharp and clean cutting tools should be used for scoring. In practice, simple knives with a serrated edge, sharp knives, but also razor blades are used. The dough skin must not be torn, it must have smooth cut edges.

The depth of the cuts depends on the proofing status of the dough piece. The more mature and fully proofed it is, the shallower the cut has to be. A deep cut should be made if the proof is pre-mature. By opening the dough skin, a balance can be created between the state of maturity of the dough piece and the time it is placed in the oven. With the scoring technique, temporal deviations in the production process can be compensated for.

Wheat breads are provided with more cuts than rye breads due to the larger volume increase. Free-formed wheat breads get several diagonal cuts, pan breads often only get one lengthwise cut. Types of bread such as baguette are cut at an angle that follow the shape of the dough and are therefore particularly long. The knife is drawn very flat. This type of scoring results in a particularly high proportion of crust. This increases the aroma of the bread significantly, because these breads are primarily characterized by their crusty aroma.

In addition to the simple cuts across the bread shape, there are also breads that are decorated with round patterns and thus give certain regional breads a particular look.