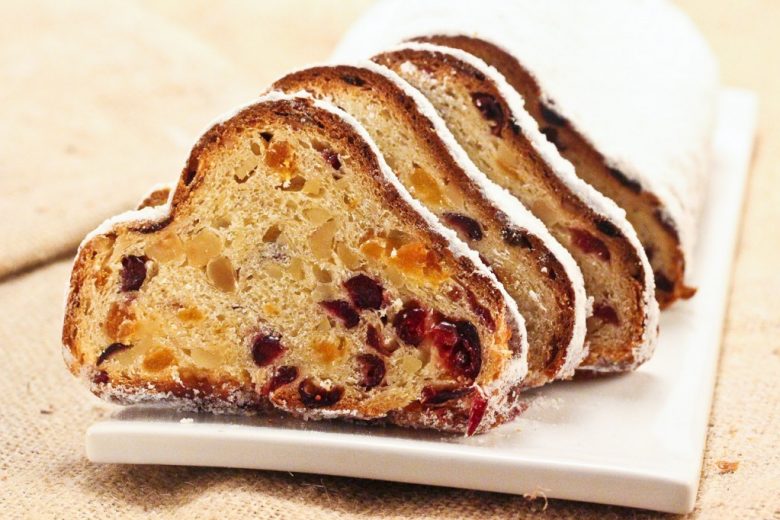 The name of the first stollen appears in documents in 1329 in Naumburg an der Saale. At that time, the stollen did not have the familiar name. Different names were and are used for this traditional pastry. Depending on the region, these pastries are called Stollen, Striezel, Christbrot or Weihnachtsbrot.

The production of Stollen should be made with Wheat Flour Type 700 (German 550). This type of flour develops better gluten than light flour types (Ö-480 / D-405) and thus better dough stability. Therefore, strong flour with a protein content of 12-13% and a moist gluten of 28-32 should be used for the production of stollen.

As a general rule, stronger flours absorb more water and this means the bake is more moist and will have better shelf-life.

Sugar certainly influences the quality of the Stollen. The effects can be seen in the browning, volume, and leavening! In some Stollen recipes, the sugar is replaced with honey (spelt Stollen).

The guidelines for enriched butter Stollen stipulate at least 40% butter to 100% grain products. Only pure butter should be brushed on after baking.

The yeast amount should be around 5-8% in the production of Stollen. Yeast contents above 10% lead to a yeasty aftertaste.

Almond stollen can mold very quickly if handled improperly. This happens if  the almonds lie in hot water for too long. As a result, the almonds absorb too much water, reducing the shelf life of the stollen to 2-3 weeks.

To achieve a longer shelf life, the almonds should be soaked in hot (60 ° C) water for 10 minutes max. Drain the remaining water, mix with the raisins, lemon peel, orange peel and rum and leave to stand covered.

They come mainly from California, but also Spain and Cyprus. They are seed-like, large berries and sometimes with a stem portion.

They are seedless, large berries, sweet and very flavorful. The main producers are Turkey, California, Australia and Greece.

Seedless, small berries, purple-black color and a bit sweet and sour in taste. They were named after the Greek port of Corinth.

Citronat, also known as succade, is made by candying the unripe, green cedra fruit. This particular type of lemon is also called citron lemon and weighs more than 3kg.

Orange peel, also called aranzini, is made by candying the peel of bitter oranges.

Many can find Stollen Spice pre-mixed in the store, but here are a couple examples for Stollen spices:

64g of Stollen spices are added to 4kg of dough.

Just as with all sweet doughs with a high fat content, Stollen are made with an indirect dough process. A guideline for the pre-dough amount is that it should include about 50% of the total flour.

This group of ingredients is often calculated on 100% of the flour mixture. In order to keep the crumb juicy and to keep it fresh, it is important to soak the fruit sufficiently with water beforehand. In the fully baked stollen, the crumb and fruit balance each other evenly in terms of their water content.

The washed and drained fruits are soaked in 40% rum overnight. The fruit mixture should be kept covered.

Production of the yeast pre-dough:

30-50% of the total flour, along with the yeast, sugar, and the entire bulk liquid are mixed to a target temperature of 24-25 ° C. This should always be well kneaded when making Stollen. By kneading the pre-dough, the later dough structure in the main dough is stabilized.

If the pre-dough is not kneaded, a sufficiently developed gluten structure cannot stabilize the main dough, as the high fat content envelops the proteins. With Stollen, this becomes noticeable after baking – it collapses on itself. This mistake is most noticeable on free-shaped versions!

The leavening power is also strengthened by the low-sugar pre-dough. The optimal ripening time of this portion is about 30-60 minutes at room temperature.

Production of the Butter/Fat portion:

This pretreatment makes the butter soft and pliable, and without any increase in temperature. The special thing about this pretreatment is that you can mix this butter dough into the pre-dough without kneading for long!

In mixing mechanically the main dough is often over kneaded, resulting in an oily dough. This would result in Stollen with a dense and dry crumb.

Production of the Stollen dough:

Mix the flour and butter mixture for 3-4 minutes on a slow speed. Then the ripe pre-dough is mixed in and mixed for another 4-5 minutes. The dough can now run at high speed, but only until a dough temperature of 25 ° C is reached.

After the dough has rested for 20-30 minutes, the fruit mixture can be carefully kneaded in.

The best oven temperature for Stollen is between 190-200°C.  The baking time depends on the recipe and the size. For 500g sized Stollen, the bake time is 50 minutes. In general, the crust should be well baked. Thick crusted Stollen have a dry crumb and tend to crumble when cut.

Buttering the Stollen after baking is crucial for preserving the freshness. It is important that the sealing is done all over the Stollen. The inner temperature of the Stollen should still be around  40-50°C when buttering, as this ensures good penetration into the crumb.

Don’t use margarine for the buttering since it has a water content of 18% and this will reduce the shelf life of the Stollen. One reason for buttering the Stollen after the sugar is applied is that the Stollen has already cooled. In this case the Stollen doesn’t absorb the fat and it remains as a layer between the crust and the sugar coating. Under slight pressure (e.g. handling) it becomes greasy.

The sugaring of the stollen should not take place immediately after greasing, but only after 30 minutes. The sugar gives the Stollen its attractive appearance and complements the other flavors.

4. The pores of the Stollen are too large:

5. The pores of the Stollen are too tight:

7. The crumb of the Stollen is discolored:

8. The crumb of the Stollen is too dry:

Recipe will come in the Advent Season!