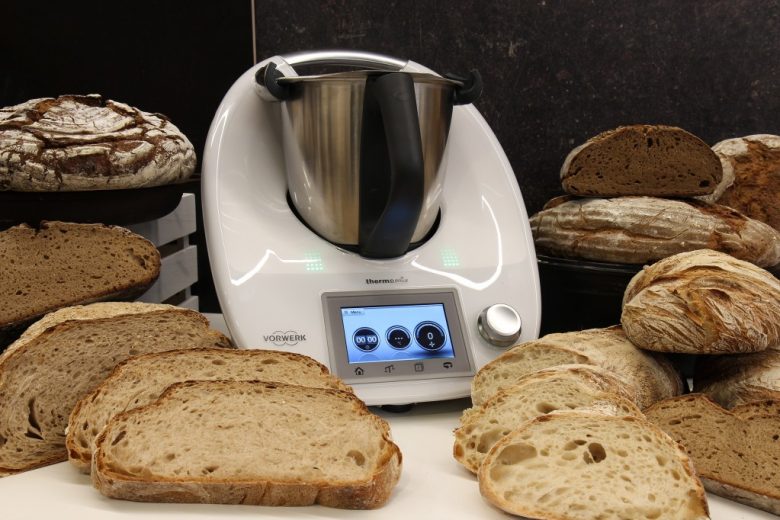 Since the inquiries about various kneading machines have piled up recently, I decided to introduce various kneaders on the blog in the next few weeks.

Every kneading machine is subjected to the following tests:

The Thermomixer is a food mixer with various functions. It can: mix, grind, chop, blend, whip, stir, cook, steam cook, weigh, heat in a controlled manner and emulsify, but can it also knead dough?

To answer this question you have to understand the function of the Thermomix first, because the Thermomix does not have a kneading arm like other kneading machines but has a knife for making dough. Many readers will now think that this cannot work, but this technology, the “Stephan mixer”, has been around in the bakery for a long time.

The picture shows the so-called mixing knife. At low speed (level 1) the mixing knife is used for stirring, at medium speed (level 2-4) for mixing and at high speed for chopping and kneading.

By tapping the left and right rotation symbol on the display, the direction of rotation of the knife can be changed as desired. This function is very important when making dough!

The 5 most important functions for baking using the Thermomix:

When the pot is clamped in the Thermomix, a scale can be activated at the push of a button. This function enables quick and accurate weighing of the recipe.

The Thermomix monitors the time and can be set manually on the display.

The Thermomix has a built-in cooking function. Temperatures of 37-120°C are possible. With this function, rye malt scalds, pre-cooked additions and scalds can be produced quickly and safely.

Speeds from 0.5-10 are adjustable. In addition, the Thermomix is equipped with a turbo speed – this is limited to 2 seconds and can be operated several times as required.

I hadn’t found any useful use for the specially created dough function in the main menu.

The setting 9-10 can be used to chop grains, seeds, pulses and poppy seeds.

Wheat doughs in the Thermomix

What points should be considered when making wheat dough:

Mix the ingredients for 10 seconds on speed setting 10 and let stand to autolyse for 30 minutes.

Add the salt and yeast and mix for 60 seconds on level 10.

Add the additional water (if possible don’t turn off the mixer) and mix for an additional 85 seconds on level 10.

Working up: After kneading, place the dough in an oiled tub and fold after 20 and 40 minutes and then store in the refrigerator. After 12 hours, separate off dough pieces, twist to form and allow to proof for 30 minutes. Bake at  250°C/ 15 minutes and then reduce the temperature to 235°C. The total baking time should not be less than 35 minutes.

Mix the ingredients for 150-180 seconds counter clockwise on level 10.

Working up: After kneading, place the dough in a tub and fold after 30/60 minutes. After a total maturity time of 90 minutes, shape as desired and then cold proof. After a proofing time of 8 hours at 4°C, slide the loaf into the oven with steam at 250°C and bake until well browned. Reduce the temperature to 235°C after 15 minutes.

Rye dough in the Thermomix

In order to successfully knead rye dough in the Thermomix, a few points must be observed:

Weigh the ingredients in order in the Thermomix and mix for 15 seconds at level 3.5. Then increase the speed to 10 and mix for another 75 seconds. During the 75 seconds, the direction of rotation must be changed every 15 seconds!

Working up: After kneading, place the dough in a bowl and allow to mature for 30 minutes. Then turn the dough out of the bowl and fold it together from all sides. With the seam-side down, place it in a floured proofing basket, cover, and allow to proof. Once ¾ proofed, bake the dough at  250°C for 10 minutes (without steam!). After 20 minutes, reduce the oven temperature to 200°C and bake until well browned.

Working up: After kneading, store the dough in a bowl for 30 minutes. Then shape into a round loaf and place into a proofing basket with the seam-side down. Once ¾ proofed, bake at 250°C with steam. Reduce the oven temperature to 200°C after 10 minutes and bake until well browned.