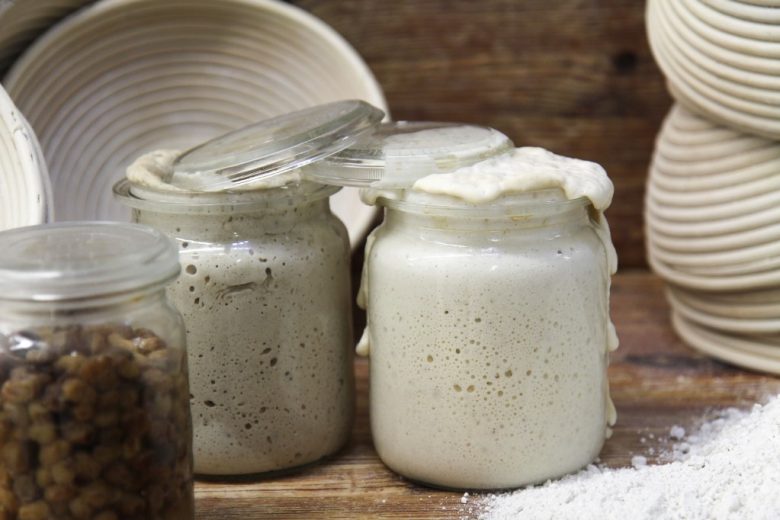 Sourdough is a flour or meal dough in which, in addition to natural wild yeast, acid-forming bacteria are present. The gas formation, mainly carbon dioxide, is created by yeasts. The acidification, mainly lactic acid, is dependent on the activity of the bacteria.

With traditional sourdough production, acid formation and dough leavening are carried out exclusively by the microflora of the sourdough. There is no addition of yeast:

The first step in baking a bread with sourdough is to create a sourdough culture and there are several ways to do this:

In this application, flour/wholegrain flour is mixed with water and is then refreshed several times with flour and water over multiple days. The spontaneous fermentation of the sourdough is brought about by various microorganisms in the flour and the air. By feeding flour and water several times, the sourdough gets its pure and typical aroma and can be used as a starter after a few days.

When preparing this, it is important that you give the dough enough time and that it is warm enough. The ideal temperature to grow a sourdough is 25-30°C. If this temperature range cannot be maintained, the sourdough will develop more slowly, but sometimes not at all!

The biggest problems stem from a room temperature that is too low. There are many recommended ways to give a sourdough a helping hand:

“Always check the temperature with a thermometer”

50g of rye flour and 50g of lukewarm water are poured into a container and stirred together until lump-free. Cover and leave to stand for 24 hours.

Put another 50g rye flour and 50g lukewarm water into the container and mix everything thoroughly. Cover and leave to stand for 24 hours.

Put another 50g rye flour and 50g lukewarm water into the container and mix thoroughly. Cover and let stand for another 24 hours. After this new feeding, the sourdough should have risen and should show increased bubbling.

Look closely! If the sourdough has increased in volume (doubled), we take 50g of the sourdough and feed it again with 50g rye flour and 50g lukewarm water (dispose of the remainder).

Mix again 50g sourdough with 50g rye flour and 50g lukewarm water and allow to mature. The sourdough should now be ripe and active. With this sourdough, the desired sourdough process for baking bread can now be started.

It depends on the type of flour:

The choice of flour type can also be decisive for the sourdough preparation. Many use conventional types of flour (type R960 or R1150) to prepare sourdough, others swear by wholegrain flours. Often only rye flour or wheat flour is mentioned in recipes, but it is up to you which type you choose. But one thing can be said: the higher the type number of flour, the better the sourdough turns out.

There are different variations and production methods in the preparation of Lievito-Madre. One way to get leavened wheat sourdough is the grated apple method.

Making yeast water (with raisins) is similar to using apples. Here, too, alcoholic fermentation is used to leaven the dough later. For this approach, 200g lukewarm water, 50g organic raisins and 15g honey are mixed together and left in a plastic bottle for 2-3 days at room temperature. Care should be taken to ensure that the raisin water is kept warm and at room temperature. To speed up the activity, the raisin water can be gently shaken 1-2 times a day.

CAUTION: Opening the plastic bottle should take place SLOWLY and under strict OBSERVATION (the stuff whistles out of the bottle like shaken champagne)! As soon as the bottle has been opened slowly, the liquid can be used as a base for the sourdough. The bulk liquid and flour are mixed up in a ratio of 1:1. This approach is so powerful that the sourdough can be used after just 12-15 hours!

As the trend towards baking without yeast is increasing, you can alternatively prepare your sourdough with baking ferment. Baking ferment is a strong leavening agent based on lactic acid. With this pre-dough starter, yeast can be completely dispensed with when baking. In the single-stage, rapid rising process, the sourdough is fermented for 15-18 hours at 28°C.

Baking fermented breads are light, fluffy and easy to digest thanks to the mild lactic acid fermentation. Depending on the recipe, up to 30 percent of the total flour is made up with the baking ferment and made as a pre-dough. A starter is required to make bread from baking ferment. The ferment dough is then used with the starter.

When making bread, the dough is subjected to sufficient fermentation and ripening time so that the crumb is even and loose. The long fermentation times make the bread very digestible.
You can get baking ferment here: Bongu.de/ Lugano