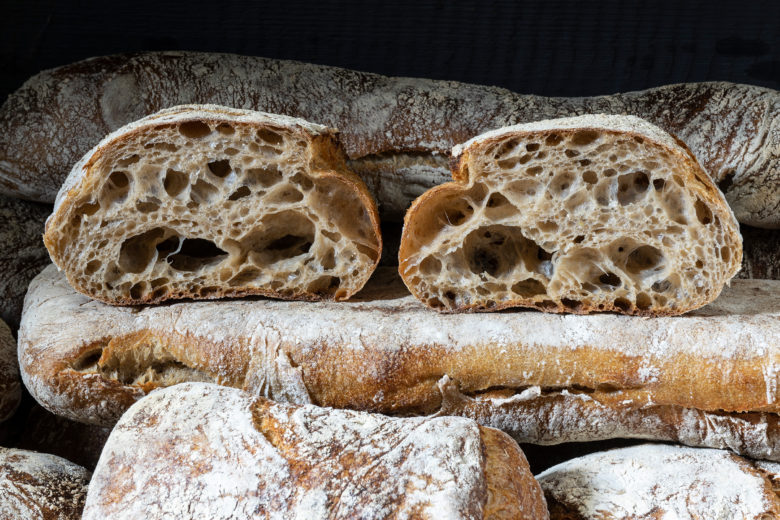 For many readers, ciabatta bread is the pinnacle of open crumb, but why doesn’t it work for so many? In no other bread do success and misfortune reside so near to each other than with Ciabatta. You stick to the recipe and instructions exactly, the bread looks perfect in the oven only to bring you back down to reality again when you cut into it- damn, not again!

The Ciabatta recipe I bring to you today is made with type 550 and as hard as it is, without the use of a high gluten flour. Of course, it is easier to achieve an open crumb by using Tipo/Manitoba flour, but the desire to make it work with the 550 alone was too great.

What is the secret to open crumb anyway? Is it the dough, the dough yield, the pre- or sour dough, the rise, the dough build up or just luck?

Very simply- it’s a bit of each and here is a little summary:

Dissolve the starter in the water and knead in the flour using a mixer. Desired dough temperature of 25-26°C/ Ripening time about 4 hours.

Caution: Before further processing the main dough, remove 100g from the starter and place in the refrigerator until the next dough work up. Only 300g of it is used!

Mix the yeast into cold water and stir until lump-free with flour. Then allow to rise at room temperature for 12 hours. If the poolish rises too quickly, simply place it in the refrigerator until you are ready to proceed.

Mix until smooth in a blender!!