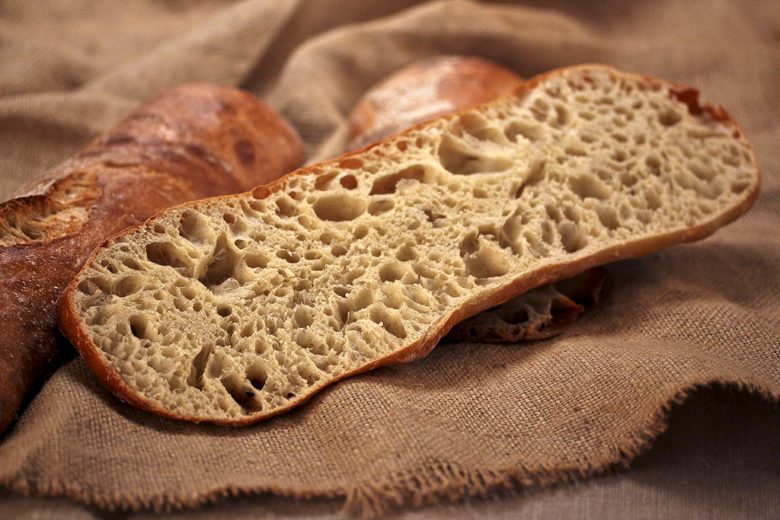 Since I’ve received some questions about spelt recently, I would like to dedicate my next recipes to the grain. I have planned three recipes, with something for everyone, from beginners to professionals. Since I’m not really a spelt-master myself, I chose different applications for all three recipes: Pate Fêrmentêe, scald and no-knead were included in the recipes.

What is really so different about spelt?

While wheat contains an average of 27-28% wet gluten, the spelt variety “Oberkulmer Rotkorn” has 33-38% wet gluten and even the Frankenkorn variety has  25-35%. Unfortunately, the qualities of spelled flour are subject to strong fluctuations, which is why it is important to keep a close eye on the dough when kneading.

Although spelt has a high gluten content, this gluten is very soft and has a strong tendency to over kneading. Spelt dough is always kneaded slowly and only 1-2 minutes quickly. A glassy dough surface is a clear indication that the dough has already been over kneaded.

You don’t add the bulk water all at once , but  rather gradually, because this guarantees a higher kneading resistance right from the start. In order to additionally stabilize the gluten, you should fold the dough once or twice in while it is maturing.

The optimal dough temperature is between 24-26°C, more than 28°C is, in any case, bad for the dough.

But since we want to bake, let’s get to the recipe!

My first spelt bread that I would like to introduce to you is the ciabatta. Translated, ciabatta means “slipper”, which is said to come from the flat, elongated and wide shape of the bread. According to records, this bread was developed and marketed for the first time in 1982 by Arnaldo Cavallari in a bakery in Rovigo in Veneto. For this bread, he used a new type of flour from his family’s mill. In the same year he had his bread protected under the name “Ciabatta Polesano”, in 1989 the name “Ciabatta Italiana” followed.

As I was collecting my recipes I came across a ciabatta recipe with a hydration of 183. I was skeptical at first, but after looking into it further I became quite interested. Can this really work- a hydration of 183 and with spelt flour?

Yes, and if you don’t try this recipe you are really missing something! The hydration level is not so common, and what follows with the ciabatta flavor is brilliant (you’ll never say again that spelt breads are dry).

I came up with something else for those that don’t prefer the large pores of the ciabatta: twist the bread into a Wurzelbrot and this will reduce the size of the pores several times, see the pictures!

Mix all of the ingredients into a dough and allow to rise for 90  minutes at room temperature. Then store in the refrigerator for 18-24 hours.

Mix all ingredients except milk on slow speed, only add the milk drop by drop. The total mixing time should take 6 minutes and it should only be mixed on high speed just until the dough separates from the side of the bowl, not any longer!

Then the dough is turned out onto a floured plate, covered, and left to rise for 40 minutes.

After 40 minutes the dough is folded from two sides into a rectangle and left to stand for another 40 minutes.

Then the dough is divided into 2 equal sized pieces and immediately placed on a baking peel (lay the dough onto some baking paper to make it easier to shuffle off!). Now just shape the ciabatta lightly and don’t handle anymore than necessary- just loosely form!

Once ¾ proofed, send into the oven at  250°C with plenty of steam, and bake at constant temperature for 25-30 minutes until well baked.