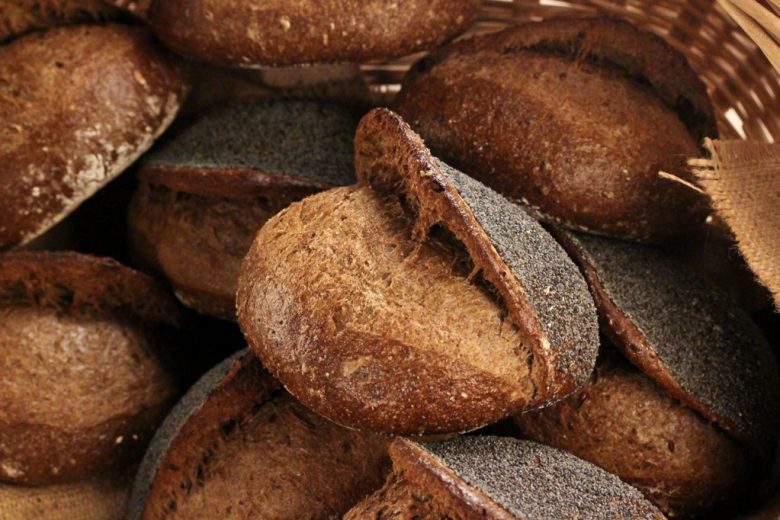 This recipe came about as an idea from the Tabatiere bread combined with a seed soaker that is mixed into a baguette dough. The seed soaker can be put together however you like, though the ratio of seeds to water should remain the same.

In order to get more flavor into the bread, dried and toasted bread is mixed into the soaker.

To really emphasize the roast flavor, roasted malt can be added to enhance the color. Sine not everyone has roast malt at home, it can be left out.

As a substitute, however, the soaker could also be used with “dark beer”, which in retrospect drives me completely crazy. Just the thought of what taste the dark beer would have brought with it brings tears to my eyes and makes my mouth water!

The finishing steps after shaping can also vary. Brush the formed Tabatiere with water and coat it in sesame, poppy seeds, coarse wheat or rye meal, …

Flax seeds are not recommended since their high fat content causes them not to bind with the dough when baked (whereby the oil is released during baking causing them to fall off of the dough).

In order to fully enjoy the taste, you should weigh out smaller pieces of dough (264g in size). This also has the enormous advantage that you can keep the oven spring under control. The final proof can also be controlled via the refrigerator after completion. This final proof should be less than 10 hours, because here I can confirm and guarantee the success.

Briefly mix all ingredients into a homogenous dough. The dough now rests for 30 minutes in the bowl (autolyze), and is then mixed again for 8 minutes on slow and about 1-2 minutes on fast. Should the dough appear too firm, water should be added in any case.

This dough now rises for 40 minutes in an oiled dough tub, and is folded once after about 20 minutes.

After 40 minutes the dough is portioned and shaped into rounds.

Before further processing the dough is covered and relaxed for 15 minutes.

Use a round stick to roll out one half thinly (3mm) and lap over the full dough. Once the size fits, moisten with a little water and press firmly. The overlapped part should cover the whole dough piece!

After all of the Tabatiere are formed they are coated on their top side as desired. Final proof either at room temperature or in the refrigerator at 4°C.

Once ¾ proofed (almost completely) the breads are pushed into the oven at 250°C with steam. . Reduce the oven temperature to 235°C after 10 minutes and bake an additional 15 minutes until well browned. To get a strong crust, the steam should be let out after reducing the oven temperature.