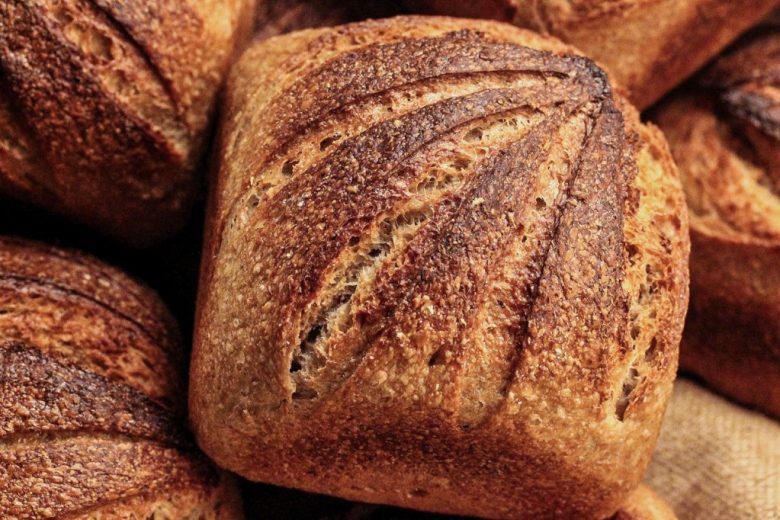 Before I change back to other bread categories, I wanted to bake something unconventionally American for the whole grain lovers. I must say, that I wasn’t always a fan of wheat bread with a high content of whole grain. Seldom before have I so strongly changed my opinion.

A pre-dough, wheat sourdough, and long-term processing are an unbeatable combination in the production of breads with whole grain flour. The blisters on the top and the wonderful coloration of the crust are an indication of the flavor that runs through this bread.

Since you use a bread form, the dough can be mixed weaker and also the production of the bread is rather simple. Whole grain flours can take on an unbelievable amount of water. THis is often underestimated and thus bread mistakes often result from insufficient bulk water. In order to address the full hydration of the whole grain flour, I have placed the entire whole grain flour amount in a poolish.

When preparing the dough, it should be noted that the fineness of the wholegrain flour will lead to differences in the amount of water absorbed.

Knead all ingredients to a smooth dough (5 slow / 5 fast). If the dough is too firm, water can be added.

After kneading, place the dough in an oiled tub and allow it to rise for 120 minutes, during which the dough is folded every 40 minutes.

After the prescribed maturity, the dough is divided into four equal sized pieces and formed into round loaves. WIth the seam side down, place into the forms.

Cover and proof the breads in the refrigerator at 4-5°C. After about 15 hours the breads are scored as desired and then placed into the oven at 250°C with steam After 10 minutes, reduce the temperature to 210°C.

Release the steam after 15 minutes and then after baking for 25 minutes, remove the breads from the frame/pan. After removing from the forms bake until the loaves are well browned.

The bake time should take 40 minutes.