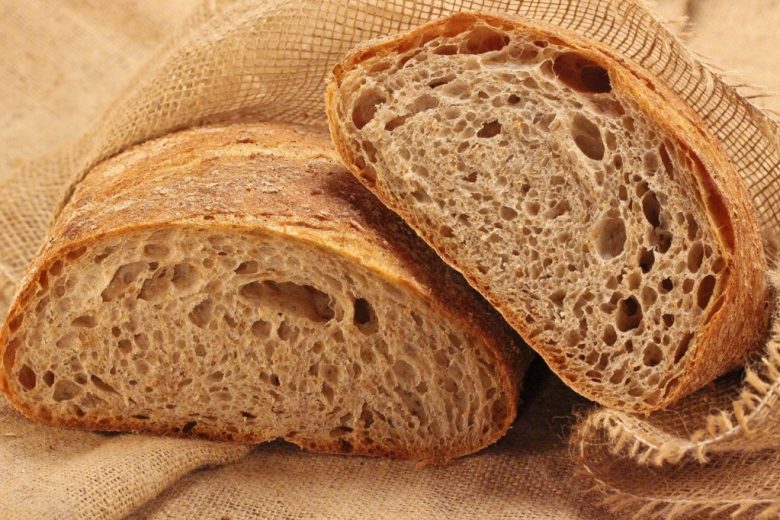 After having baked some French breads recently, I would now like to put up some recipes for Italian breads on the bolg. The first Italian bread from this sort is the well-known “Pane di Lariano”. The original recipe comes from the region of Castelli Romani. The 1-2 pound loaves mature in a wooden form covered with linen cloth, they are then baked in a wood-fired oven. The bread takes on an aroma from the chestnut wood that is typically used as fuel for the oven.

The unique taste of this bread quickly became known beyond the city, thus a regulation was placed on the original production of this bread. This served to protect the origin and the quality of the original from imitations. N gastronomy, this bread is often served with dried meat, sausage, cheese and wine.

Mix all ingredients on slow for 8 minutes and on fast speed for 5 minutes. By the end of the mixing time the dough should have completely released from the side of the bowl. Then the dough is placed in an oiled tub and left to rise until it has just about doubled in size. Now the dough is folded for the first time and then again after another 30 minutes.

Then the dough matures covered in the refrigerator for 6-8 hours (should the maturity extend to 12 hours the dough should initially be folded after 20 and 40 minutes)!

Press the dough lightly and evenly with the palm of your hand- this results in an even pore distribution! To shape it, the outer edges of the dough are laid onto the middle (overlap slightly). When all 4 sides have been folded into the middle the dough should be rectangular in shape. The bread is now turned over and with the seam-side down, placed on baking paper (the baking paper makes it easier to put the bread in the oven when it is fully proofed).

The bread should fully proof on the baking paper on top of the bread peel. Once fully proofed it is placed in the oven at 250°C with strong steam. Release the steam after 15 minutes and reduce the oven to 190-200 °C. Due to the high hydration, the bread should be baked for 60-70 minutes..

If you would like, you can score the bread on top, this not so easy because of the bran. There is also the risk that the bread could collapse once it is fully proofed!