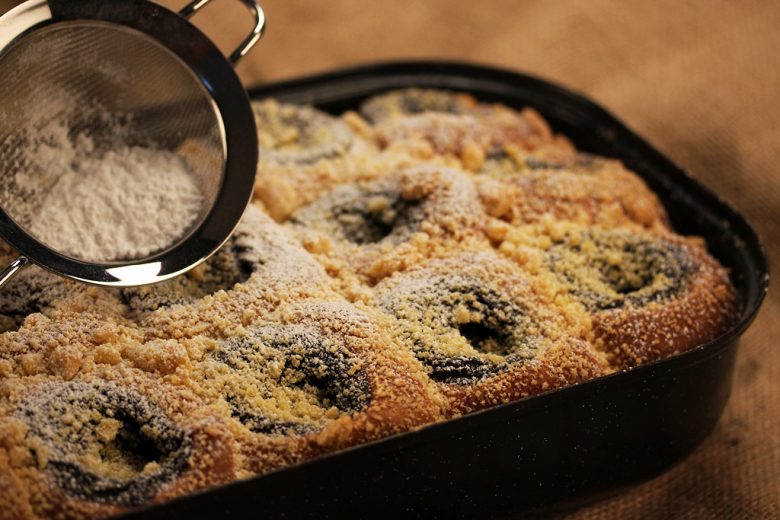 Buchteln (Wuchteln) are a characteristic dish of bohemian cooking, that also have a fixed place in the Austrian pastry kitchen.

The Buchteln are usually filled with plum and apricot jam, but this time I came up with a very special variant for the filling.

With this variation, the Buchteln are filled only shortly before baking, and the result really impressed me. After the dough proofing, the dough was divided into even pieces and placed in a pan coated with butter.

Only after ¾ rise were the Buchteln filled using a piping bag. The nozzle from the piping bag is stuck about halfway into the risen dough piece, and then filled with jam. In order to lend the Buchteln some extra flair, I covered them before baking with some butter streusel.

After baking, the Buchteln are dusted with powder sugar and eaten with warm vanilla sauce.

Stir all the ingredients to a homogenous dough und let stand for 90 minutes. Before the sponge collapses the main dough should be mixed.

Knead all ingredients to a smooth dough (7 minutes on slow and 4-5 minutes on fast). After kneading allow the dough to rest for 30 min. Then the dough is divided into 18 pieces/each 62g and formed into round pieces. The round formed pieces are placed in a well buttered pan and then covered and placed in a warm place.

In the meantime the butter streusel is prepared:

For the crumble, rub all the ingredients between the palms of your hands until crumbly and finally press them through a coarse pasta sieve.

Once the Buchteln have risen about 2/3, the desired jam is filled into the dough pieces with a piping bag! To finish, the butter streusel is spread on the filled Buchteln and baked at 200°C reducing to 180°C for 40 minutes.