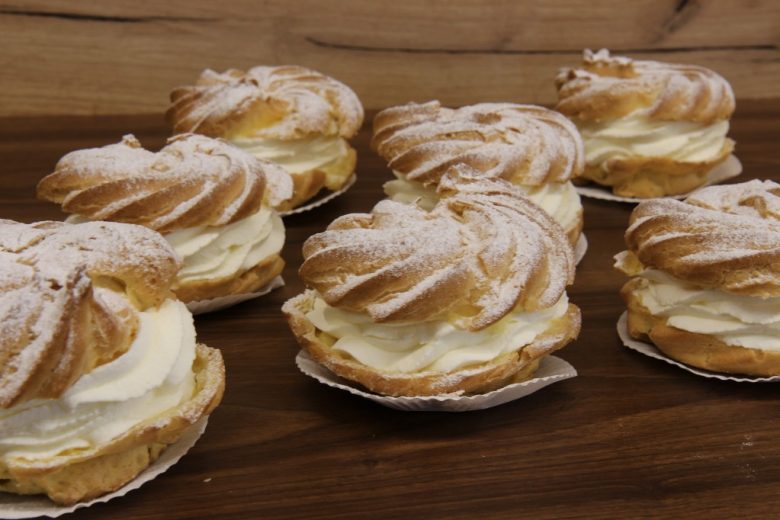 Choux pastry is known for its almost neutral taste that, in addition to the large cavities on the inside, lends itself to being filled with both sweet and savory fillings. The choux pastry is unique in its production: from the “cooking/toasting” and subsequent baking, the dough is cooked twice.

Butter, milk, and water are mixed and boiled for the base dough. Then with constant mixing, flour is added. Now comes the “cooking/toasting” of the mixture: the dough is stirred in the pot under heat until it forms a ball, loosens from the bottom of the pan and forms a white coating on the bottom of the pot. (temperature of about 80°C).

Before you mix in the eggs and salt in the next step, the choux dough must cool down (if the temperature is too high, the eggs will clot!) Gradually work in the eggs and make sure that the mixture doesn’t get too soft. The finished choux dough should be smooth and shiny on the surface.

The relatively large amount of liquid evaporates during baking. The eggs in the mass ensure that the gas bubbles escape only slowly and the mass rises very well. Milk sugar gives the baked goods an appetizing browning. The steaming means that the surface remains moist and elastic for a long time.

Influence of the baking temperature for different consistencies:

Heat ¾ of the milk with the sugar, mix the rest with the pudding powder and egg yolk. Stirring constantly add the pudding mixture to the heated milk and heat through. Pour into a flat container and cover with cling film.

Mix leaf gelatin with water and dissolve in a water bath. Mix with the pudding, rum and powdered sugar until smooth and fold into the whipped cream.

Divide the choux pastry in the middle and fill them with the vanilla cream and, if desired, add a little powdered sugar.