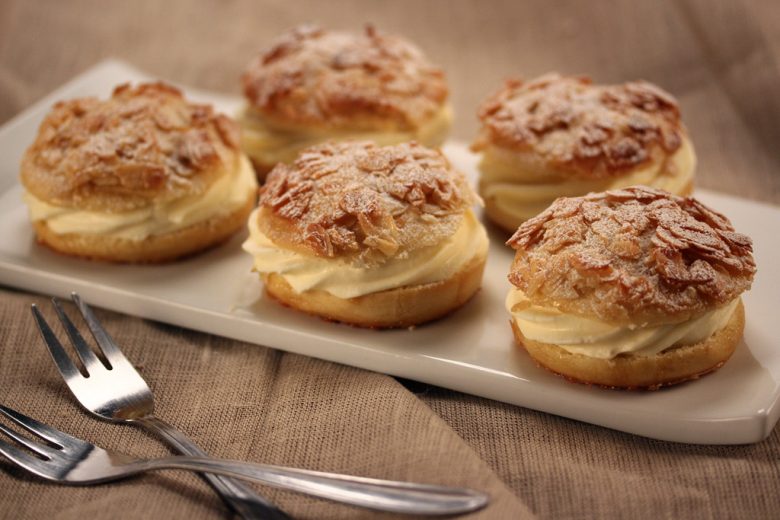 This recipe is a reader’s request! Bienenstich is a traditional yeasted cake that has an almond, sugar, honey cream toppings that caramelize when baked. After baking, the tray-bake is filled with a vanilla cream.

In order to try something new I decided on a “finger food” variation.

As the basis, a heavy yeasted dough is used, which is weighed out into 40g pieces after rising. The dough pieces are rolled into rounds and left to rest for 20 minutes, covered. In the meantime the almond mixture is cooked. Before placing the almond mixture on top, the dough is rolled flat (finger thick) with a rolling pin, and then they are covered with the almond mixture.

Once ¾ proofed the dough pieces are baked at 200°C until golden. After baking, allow to cool and fill with cream pudding.

Cover and let rise for 60 minutes and use before it collapses.

Knead all ingredients to a smooth dough.

Cover and let rest for 20 minutes, then weigh out into 40g pieces and roll unto round dough balls.

While the dough is rising, prepare the almond mixture.

Heat granulated sugar, cream, and honey then fold in the sliced almonds.

After baking let them cool, then cut through the middle and fill with cream pudding. Mixture of pudding and whipped cream should be in a 1:2 ratio. (it is recommended to prepare the pudding several hours before. The whipped cream is then gently folded into the cooled pudding).