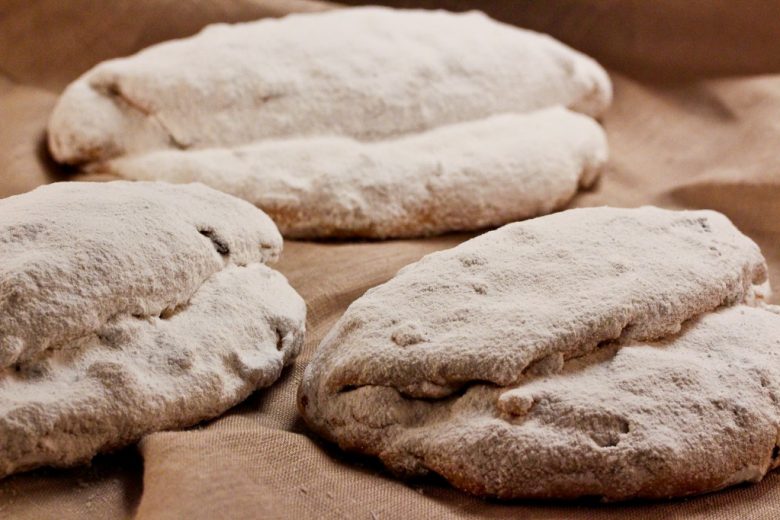 The Christmas stollen, which is supposed to symbolize the Christ child wrapped in a white swaddle, is still one of the most popular breads during Advent season. The name of the pastry varies depending on the region but is called  Stollen, Striezel, Christbrot or Weihnachtsbrot. How would the Stollen have tasted in ages past?

Many ingredients and spices that we take for granted today were still unknown and sinfully expensive. In many areas, Advent was known as a time of fast, so butter was forbidden and only oil was allowed. However, high-quality oil from tropical countries was hardly available and the rapeseed oil of that time was not exactly considered to have a very pleasant taste.

However, over the years the Stollen have become better and better, at least where there was prosperity, like In Saxony and in the cities around the capital. During these earlier times the Dresden Striezelmarkt was established and it is celebrated as the oldest Christmas market in Germany. Last but not least, the many visitors to the Striezelmarkt over the years will have contributed to spreading the fame of the Dresden Stollen beyond the borders of Saxony

Mix the ingredients about 30 minutes before mixing the main dough and allow them to soak. Let any excess milk drip off and use in the main dough as part of the milk portion.

Knead all the ingredients into a smooth dough ( 4 minutes slow/ 3 minutes fast), then cover and allow to rise for 45 minutes. The dough temperature should be 25-26°C.

Mix the ingredients in the kneading machine on slow speed until a smooth mass is formed! The butter dough is stored in the refrigerator until working up the main dough!

Mix the ingredients on slow for 6  minutes. Stollen dough requires an intensive kneading phase, yet this should not last more than 3-4 minutes. Pliable dough is better for forming later. The kneading time will also depend on the dough temperature which should not exceed 25-26°C.

When making an artisanal, hand-shaped Stollen, the dough should be kept a bit firmer!

After processing the dough it gets a rest of 20-30 minutes. After this rest the entire fruit and almond mixture is evenly mixed in.

Divide the dough into two equal sized pieces and form into rounds. Let it rest for a short period then form into oblong Stollen. After forming, cover and let the Stollen proof. The proof has a major influence on the volume and evenness of the crumb. The optimal proofing depends on the dough and room temperature and should not exceed 40 minutes. Proofing only results in success if the dough has been optimally prepared.

It is customary to put the Stollen in the oven immediately after processing. Some set the Stollen to proof and put them into the oven once 2/3 proofed. A baking time of approx. 55 minutes is usually taken as a basis for a stollen of approx. 1000g. A good bake can be achieved both at a constant oven temperature of 200 ° C and at an initial temperature of 210 ° C, reduced to 180 ° C.

After baking the Stollen in brushed with hot butter and covered in granulated sugar. After it has cooled down dust it with powdered sugar.