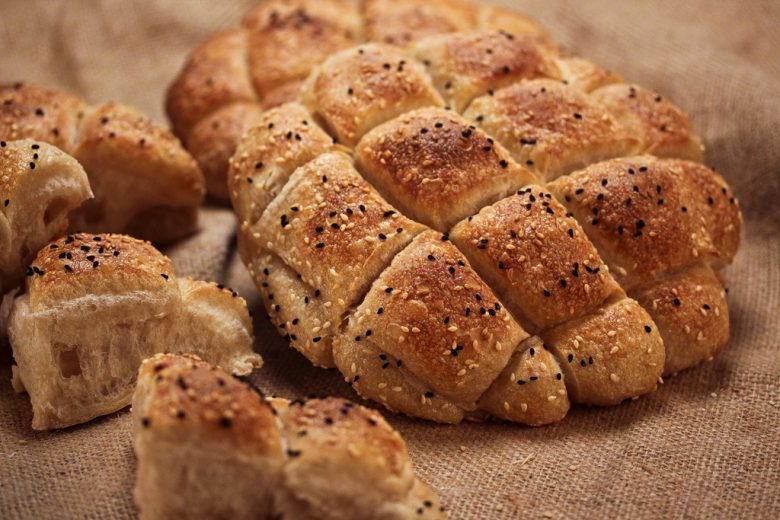 For the pentecost weekend coming up I want to start the grill, and with it the flat bread! For this flat bread recipe, there are two pre-doughs that form the backbone for the crispy crust and the tender crumb. The pre-doughs were divided between wheat sourdough and poolish.

The addition of 10% sourdough to this recipe was responsible for the taste and the shelf-life. Too high a quantity of sourdough causes too much acid, tightens the gluten structure, makes the dough sticky, and the crumb too fine.

The poolish is completely different. This pre-dough serves less to increase the flavor rather to increase the breakdown of the proteins gliadin and glutenin. The poolish portion in the recipe contains 30% of the total bulk liquid. Poolish is ideal for breads and rolls that should have a crisp and crackled crust.

In general it is recommended to use these preliminary phases because a large portion of the flour can be pre-hydrated. Pre-doughs bring out more flavor, make the crumb more moist and lengthen the shelf-life.

All ingredients (except olive oil) are kneaded for 8 minutes on slow speed. The dough is kneaded on the second speed until it begins to separate from the side of the bowl (after it separates, knead ½ minute more to mix in the olive oil).

After kneading, place the dough in an oiled bowl and allow it to rise for 120 minutes (fold twice after every 40 minutes). After the rise time is up, divide the dough into 3 equal sized pieces and form into round dough balls. Cover and allow to rest for 40-50 minutes.

To form, the dough ball is dusted with a bit of rye flour, flattened out a bit, and with the handle of a wooden spoon, the pattern is made. Be sure to press the dough all the way to the bottom, otherwise the pattern will disappear during baking.

After forming, let the flat bread proof further, and then sprinkle with sesame and caraway seed (spritz with a bit of water before covering).