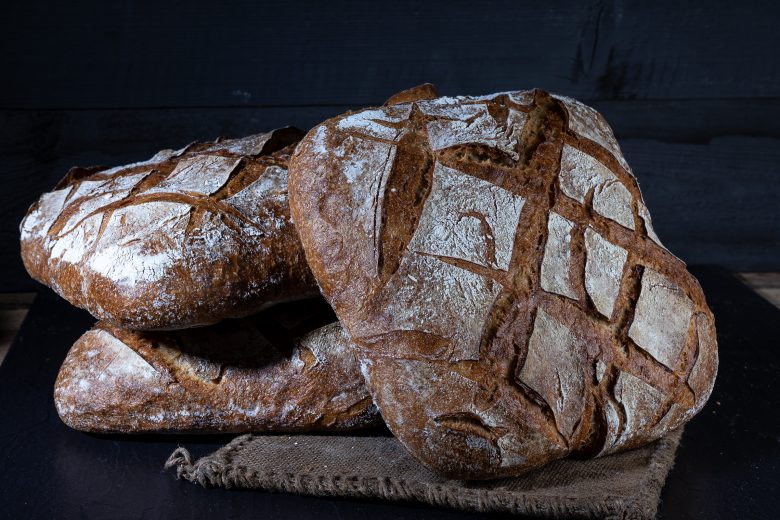 In the past I had tried several times to make a pure wheat sourdough bread with only French stone ground flour T80 without the addition of baker’s yeast. My tests repeatedly failed because the acid in the sourdough was too strong!

The strong acidity of the sourdough is quite noticeable in the dough production! Such doughs are difficult to knead and seem to exhibit the qualities of over-kneading (they are difficult to rustle from the side of the bowl, if at all). And in the dough tub, the acid shows its full effect – the dough loses its strength after folding and strong cracks appear on the surface of the dough (the cracks are shiny, watery).

To avoid such a mistake, a multi-stage, mild and strong rising sourdough will help. The starter should either be refreshed or taken from an active sourdough. Both help the sourdough to actively take off in the first stage. The first stage is started with 10% of the amount of flour,  a maturing time of 8-10 hours and a dough temperature of 27-28°C. The sourdough flour quantities are divided into 50% in both stages. With the refreshment of the second stage, the sourdough activity increases and the acidity is kept to a minimum at the same time – this results in a strong and mild sourdough.

Dissolve the starter in warm water and the stir in the flour until lump-free. Then allow it to mature for 8-10 hours- target dough temperature 27-28°C.

Completely dissolve the sourdough from the first stage in water and then mix in the flour until lump-free. Maturity time for the second stage is approx. 5-6 hours at 27°C.

Mix together the T80 and water and let stand to autolyze for 1 hour. Then add in the sourdough and salt and mix on slow speed for 6-7 minutes. Then knead for one minute on a fast speed setting.