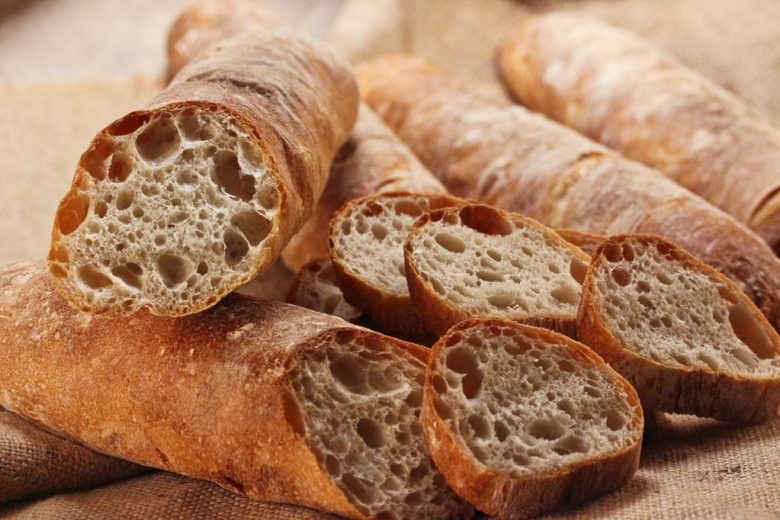 “Stirato” is the name given to the  elongated, golden brown and aromatic baguette made by the Italians, but what is the difference to the French baguette? In terms of taste, it can easily compete with that of the French, but the biggest difference lies in the pre-dough. Poolish and wheat sourdough are the French classics, but the “Biga” starter is reserved for Italians.

The Biga is a pre-dough production in which the hydration ranges between 145-160. Yeast is added as a raising agent. After mixing the pre-dough ingredients, it should mature for 1-2 hours at room temperature before storing it in the refrigerator at 3-4 ° C for another 18-48 hours. This short maturation time at room temperature gives the Biga a better and more intense flavor. The dough should be taken out of the refrigerator an hour before further processing.

Another new experience was in determining the right time to proof before baking. Normally the scoring on baguettes takes on the function of a pressure relief valve. Therefore, French baguettes are always put into the oven when a little under-proofed, but how do I know the perfect proof of a baguette that is not scored?

The Italian baguette is loosely rolled up into a cylinder after it has been weighed out. After a 20 minute relaxation phase, the cylinders are rolled out further. As a result, many air pockets are formed, which lead to an irregular surface and this is where you begin to observe the status of the proof. Proper proofing is achieved when no more bubbles can be seen on the surface – the surface of the dough should be nice and smooth.

Mix together the water and yeast, and mix in the flour by hand until lump-free. The pre-dough matures for 1-2 hours covered at room temperature and a further 18-48 hours in the refrigerator.

Knead all ingredients into a smooth dough. After kneading the dough is matures in an oiled tub with a cover.  This is then folded after 30 and 60 minutes and gets a further rest for 3 hours in a cool spot.

Now the dough is divided into 5 equal sized pieces and loosely rolled into cylinders. Subsequently the formed baguettes should relax for 20-30 minutes. These dough pieces are now rolled into the desired lengths and laid out in a linen cloth with the seam-side down.

By rolling the dough pieces long, hardly any air bubbles escape, and it is precisely these that help us to determine the proofed state of the baguette. As soon as the dough surface is smooth and firm, the baguette can be put in the oven.

The baguette is baked at  250°C reducing to 240°C with strong steam. The steam is released only at the end of the baking time- this ensures a better crust formation. The baguettes are baked for 22-24 minutes, pay attention that a strong crust forms.