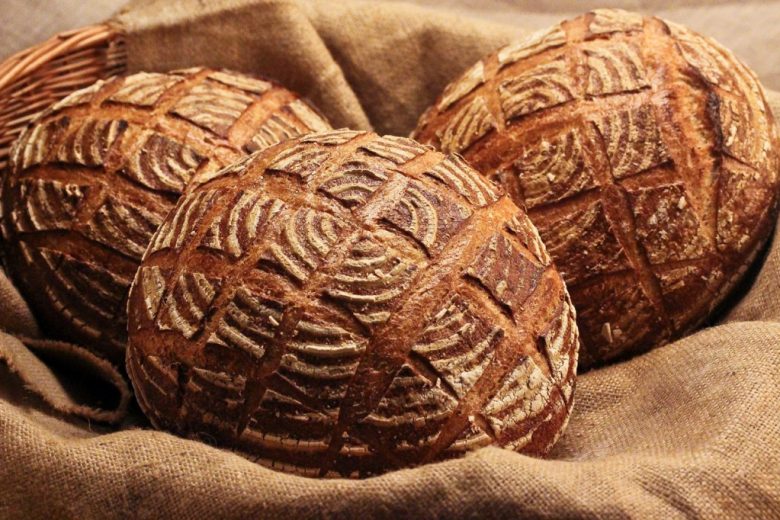 Since I have neglected a few bread types recently I will now add some recipes to round them out. One of these is a San Francisco Sourdough Bread. In the past I had ventured to bake such a bread but the taste was never convincing. Extremely sour, chewy crumb, and coarse poring was the end result. And I expected similar characteristics with this attempt, but it was really just the opposite. These loaves were filled with a mild and superb taste, surrounded by a strong crust with a soft and fluffy crumb!

But what was different this time?

Did this bring about the well-rounded and mild taste in the bread?

I reckon, since the maturity time for the wheat-rye sourdough was 12 hours. The sourdough temperature was 32°C just after mixing and this fell to the ambient room temperature of 24°C, which should explain the more mild taste.

Another new experience was the production of a wheat bread with yeast which proofs slowly at 8°C for 20 hours. It is important that after the kneading process, the dough is given 3 hours to develop! Only after these 3 hours is the dough formed and stored at 8°C in the cooler. During the entire fermentation period it is important to cover the dough with a cloth or with a plastic bag.

For the following recipe you first need to mix a starter with a TA of 200. The maturity time for the rye sourdough can be between 15 and 24 hours since the sourdough cultures are well activated during this time. The subsequently produced wheat sourdough should now have a maturity time longer than 12 hours!

To begin the mature levain should take a bath in the measured water amount! Mix the sourdough in the water with your hand and let it stand for 15 minutes.

Then briefly mix in the flour and let it stand for 30 minutes to autolyze. Now mix in the salt and knead into a smooth dough.

The kneaded dough now matures in a covered tub for 180 minutes (keep it warm!!!). During the 180 minutes the dough is folded once.

After the 180 minutes the dough is formed into one large or two small loaves. These should now be covered and allowed to slowly ferment at 6-8°C. On the day of baking, once the oven has preheated to 230°C, remove the dough from the refrigerator and allow it to acclimatize. Before baking, score the loaves several times with a sharp knife and then bake at a constant temperature of  240°C.

For 900g loaves the baking time should take 40-45 minutes (if they are browning too quickly the oven can be reduced to 220°C). To get a stronger crust the steam can be let out towards the end of the baking time.

Attention: The proofing basket should be lined with a tea towel because of the long fermentation time! From the long and cold fermentation the dough has a risk of sticking in the basket.