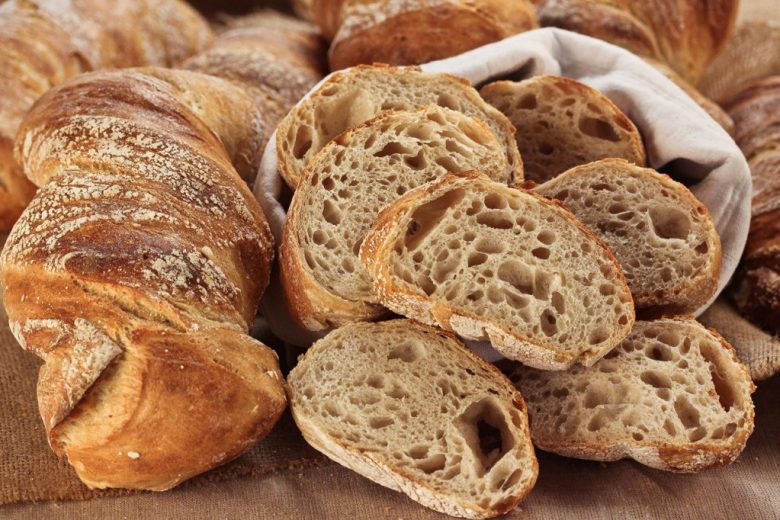 The legacy of the French art of bread has given us many specialties. These differ not only in shape and production, but also in taste. So let’s put the classic baguette aside and pull another one out of the bread basket, the “Pailasse de Lodêve”.

The city of Lodêve and the region maintain the tradition of long and twisty breads. These wonderful Pailasse show these qualities in their irregular and twisted form. From the outside appearance, you might think it is a thick and heavy bread, but the opposite is true when held in the hand. It reveals itself as a crusty and light bread that has a wonderful airy-ness throughout. Once cut, the open crumb and the aromas of a well-rounded sourdough are apparent… who’s interested!

The dough now matures for another day in the refrigerator. Shortly before baking the matured dough is turned out from the tub and then divided into three pieces. These are simply twisted and then placed in the oven with moderate steam.

To begin, the wheat sourdough, flour, and water are mixed until lump-free and left to autolyse for 30 minutes. Just after the autolyse we add the yeast and sea salt and mix the entire mass on slow speed for 8 minutes. Then the speed is switched to fast and the kneading is done until the dough releases from the side of the bowl.

After kneading the dough is placed in an oiled tub. There the dough matures for 60 minutes and is folded after each 30 minutes. Just after the dough is folded the last time it is covered and placed in the refrigerator for 12-15 hours.

On the next day, the oven should already be preheated 250°C before the dough is worked up since this takes only 3 minutes. The dough is tipped out of the tub onto a floured work surface and loosely formed into a rectangular mass. The dough mass is divided into three equal sized pieces and the lengths are loosely twisted (1-2 times).

The formed Pailasse are immediately placed on a baking peel and then shuffled into the oven with moderate steam. Beginning temperature should be 250°C and should fall to  235°C during the baking time. The bake time should reach 30 minutes, since in order for the bread to achieve its full flavor, it should be baked as long as possible.