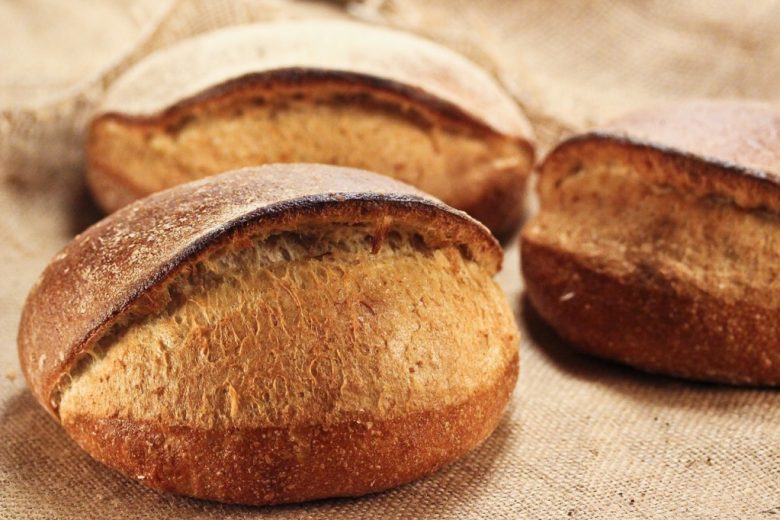 A few days ago I was flipping through the book “Bread and Pastry” again and I was particularly impressed by the “Tabatiere“ bread. This bread is a specialty from France and should be reminiscent of a snuff box (you should imagine the tobacco falling out of the box). I was quite surprised by my first attempt at baking them, for I never expected quite the result. My fear was that the oven spring would distort the overlapping piece but it did not, presumably due to the high pre-dough content.

A connection can also be seen in the fermentation time (cold fermentation). Large quantities of pre-dough rule out a very long bulk fermentation because the degradation of the gluten in the pre-dough would progress too far.

Through the cool (and short) dough maturation the gluten structure was further weakened, but the flavors continued to develop. Furthermore, a better flavor could be achieved with a higher dough yield (DY). Dough yields above 170 are most suited for optimal flavor development.

During the bake even more intense crust aromas arise. Depending on the crust color and strength the pleasurable characteristics of the bread are surely enhanced by the combination of the crumb, the crustiness, and the taste of the crust.

Mix on slow speed for 3-4 minutes in the mixer until clump-free and after 90 minutes rise time at room temperate, cover and place in the refrigerator at 4°C to rise.

Knead all of the ingredients into a smooth dough. Due to the high pre-dough content this dough needs a mixing time of 7 minutes on slow and 3 minutes fast. After kneading the dough is covered and rested for 60 minutes in the mixing bowl.

After the dough is rested it is divided into equal-sized pieces and formed into round loaves. With the seam-side down, rest the loaves for another 30 minutes.

Now comes the shaping: The loaf is pressed slightly flat with the hand and with a wooden dowel (rolling pin) half of the loaf is rolled thin from the middle. The rolled-out half is then folded over to completely cover the non-rolled half. Before the folding though the thin rolled side is dampened with water to help the dough stick to itself.

The formed loaves are now left to rise on a piece of baking paper with the thin rolled side up. Now a little bit of corrective shaping is done and if desired they can be dusted with flour.

Once ¾ risen, bake with strong stream at 250°C. After 3 minutes reduce the oven temperature to 210°C and bake until well browned. The baking time should be about 35-40 minutes.