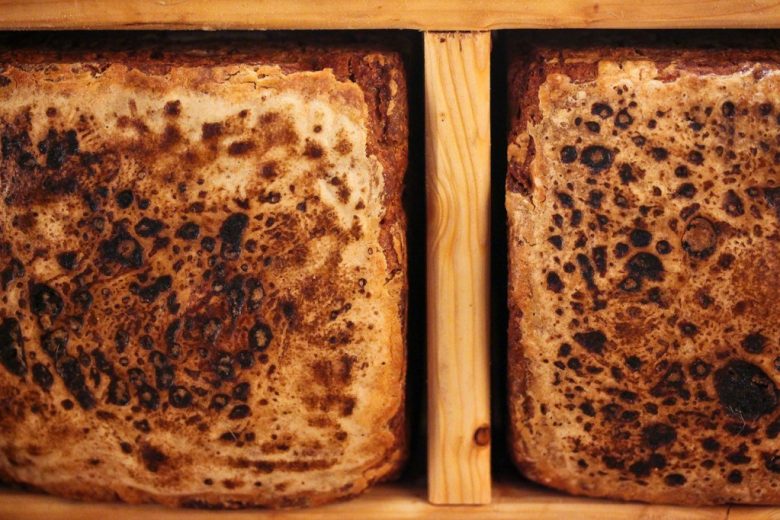 This has been on my baking list for a long time but I somehow have never managed to bake it! The time had finally come this week, and I am seldom so happy as I was with this result. Form, taste, looks, and rise worked right away on the first try.

The Gersterbrot that I have described is one of the oldest specialty breads that are made with a unique baking process.  Gersterbrot, or also Gerstlebrot has nothing to do with barley grain (Gersten). It is a mixed rye / wheat bread in which the dough is torched with an open flame after shaping. Thereby forming brown speckles and roasted bits on the crust while hardening. The firm dough skin should prevent aromatic flavors from escaping the bread during the baking process.

In the past, the bread was roasted between the flames of wood-fired ovens. Today this is done in gas-heated roasting appliances or, as I did, with a blow torch.

In my research I uncovered different methods for making Gersterbrot, and today I would like to introduce you to one of them!

After torching, I coated the dough skin with lard (or margarine) because: the water with the floury components of the dough skin forms dextrins that caramelize slightly during toasting and baking, while the fat in combination with the flour on the dough surface ensures toasted and roasted flavors in the bread.

Mix all ingredients on slow speed (about 5-6 minutes) into a dough.  The dough is given a rest of about 30 minutes in the bowl.

Then the dough is divided into two equal sized pieces and formed into round loaves. After forming the loaves are placed in oiled box forms, and left to proof for 50 minutes.

Now the remaining sourdough is thinned with some water, and carefully brushed onto the bread tops with a brush. After a short drying period the tops are flamed with a blow torch.

After flaming, the lard is brushed onto the tops of the dough while still hot.

The bread is baked with steam once fully proofed at 250°C reducing to 200°C for about 70 minutes.

In order to achieve a good crust, the wooden box form is removed after 25 minutes.

Since the Gerterbrot is flamed with a blow torch it gets the name of “Fire crust”.