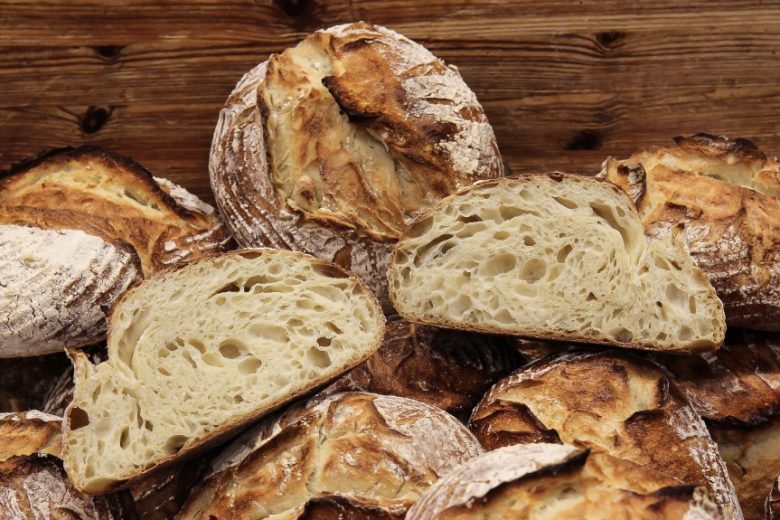 This bread is for Schelli, the soft dough extremist! With a hydration(TA) of 185%, (from 100% semolina!!) this recipe even makes my friend Manfred sweat.

I asked him 5 times: Are you sure the hydration (TA) is 185?- Of course, it works! This clear YES had vanished without a trace after the autolysis and I had a big smile on my face! Do you still need water (grin)?

It would have been easiest to just add some flour but the pride was too great. We kept composure yet regarded the dough soup as an offering. Since this autolyzed soup just covered the bottom of the keading bowl and it would have been impossible to subject the dough to another mixing and kneading time, it got sent to the mixer. At medium speed there was great amazement after just 5 minutes! The dough began to release from the side of the bowl (so the grin went back to my friend) and after a total mixing time of 9 minutes it had completely detached from the bowl.

After the dough was mixed, it was stored in a dough tub for 120 minutes (+ folded twice). The dough was then divided and loosely shaped into round loaves. However, these were reshaped after 40 minutes and only then placed in the proofing basket. After proofing for about 60 minutes, the bread was baked at 45 ° C / 35 with steam.

What amazed me was the high hydration of 175 (!) And the smell of the bread! Yes, exactly, the scent – it smelled of CINNAMON when it was still warm! I would never have dreamed of cinnamon, but Schelli, sniffing around the whole bakery with the bread under his nose and sighed: Wonderful, it smells of cinnamon (he still dreams of it today ;-)).

Mix the ingredients and let stand to autolyse for 60 minutes

Mix all the ingredients on a medium speed until the dough releases from the side of the bowl. Store the dough in a dough tub for 180 minutes (fold twice). Then divide the dough and loosely form into round loaves. The loaves are then reshaped after 40 minutes and then placed in a proofing basket (final proof approx. 60 minutes).