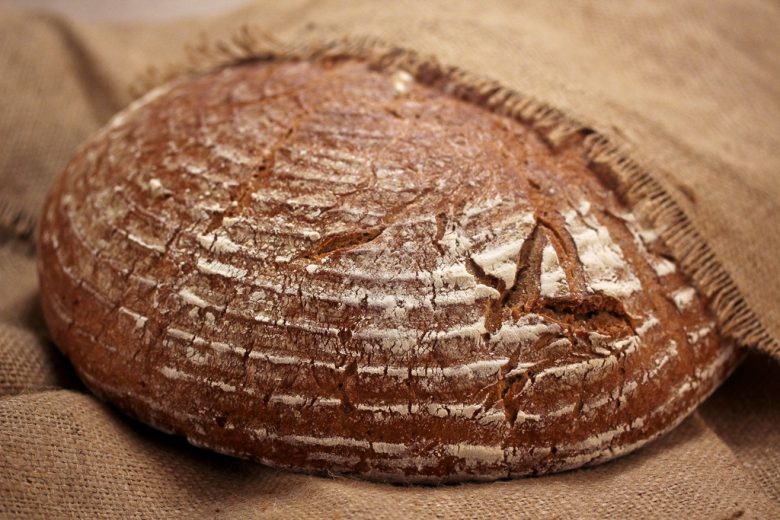 With this loaf I tried to bring together a few ideas at once and one of those was the processing of the dough. After mixing and rising, the bread dough is simply placed in a floured bread basket and formed into a round loaf by tumbling it several times.

This method is especially recommended for beginners, since the bread can be mixed with a higher hydration and despite this the shaping is easy.

I was amazed when I looked at the crumb. It was loose, elastic and yet compact and the pores were exactly as they should be.

When baking I had expected more cracks to appear in the crust, when this didn’t happen in the first several minutes I simply let the rest of the steam out of the oven- with success!

I want to try out a few things with this recipe! So I used two different sourdoughs to get a well-rounded flavor.

Characteristic of the use of two sourdoughs is the hearty and aromatic taste. Since when using wheat and rye sourdoughs you can vary the flavor contributions and improve the shelf-life.

Mix all the ingredients at a slow speed.

After the mixing time the dough should be covered and placed in a warm spot to rise for 45 minutes.

In the meantime, flour a proofing basket and preheat the oven to 250°C.

Now the bread dough is removed from the dough bowl and placed in the proofing basket. With repeated “tumbling”, the dough is formed into a round loaf.

The final proof only takes about 45-60 minutes due to the light shaping and the use of two sourdoughs!

Depending on the appearance and baking behavior, the steam can be let out after 2 minutes. If more cracks in the crust are desired, the steam should only be released after 5-6 minutes.

The total baking time should take at least 70 minutes.