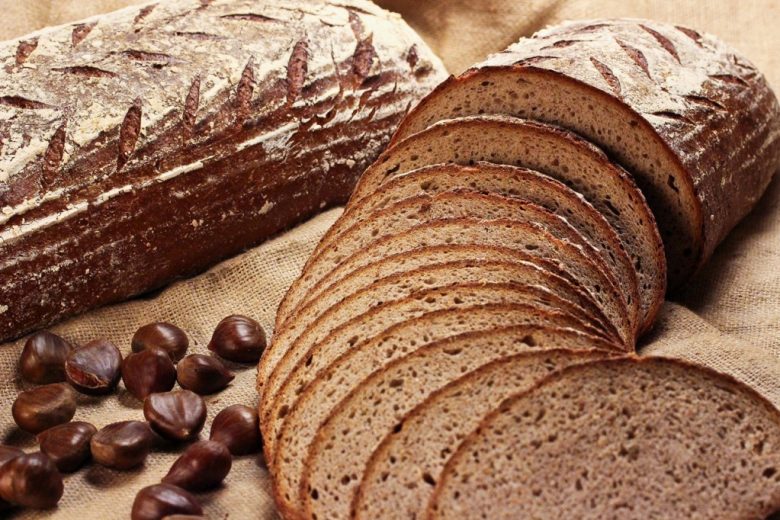 So I promised my readers a spelt stollen and what comes out of it – a “chestnut bread”. After the 3 unsuccessful attempts to produce an edible spelt stollen (2 of them got whiplash from being thrown across the bakery), this bread was created out of the need to use ingredients on hand. For me, too, something often flies into the trash three times in a row – that was just too much for a fourth attempt!

Now I stood empty-handed in the bakery and tried to find the faults in my failed stollen. I stood perplexed for half an hour and my feet were beginning to take root in the ground. I needed a distraction in some bread dough to work, but which and with what ingredients?

Just at this moment, Alfred (our confectionary director), walked by with a box of chestnut puree under his arm and immediately I got the idea for a chestnut bread, but how and what kind of sourdough?

A bucket of wheat sourdough was still on hand and the rye sourdough is always available. An additional flour combination from T80 and wholegrain rye flour mixed with chestnut puree would be a special kind of diversion. The only thing left was to get a pen and paper to bring the chestnut  bread into being!

All ingredients are mixed for 7 minutes on slow. To get some air into the dough it it mixed for a further minute (not longer) on a fast speed. After kneading the dough the dough rises, covered, for 20 minutes in the bowl.

Now the dough can be divided and shaped as you like – either in a whole piece or divided into round loaves or Striezeln.

The chestnut bread is baked at 250°C reduced to 200°C with steam. Release the steam after 3 minutes and bake depending on the size of the dough.