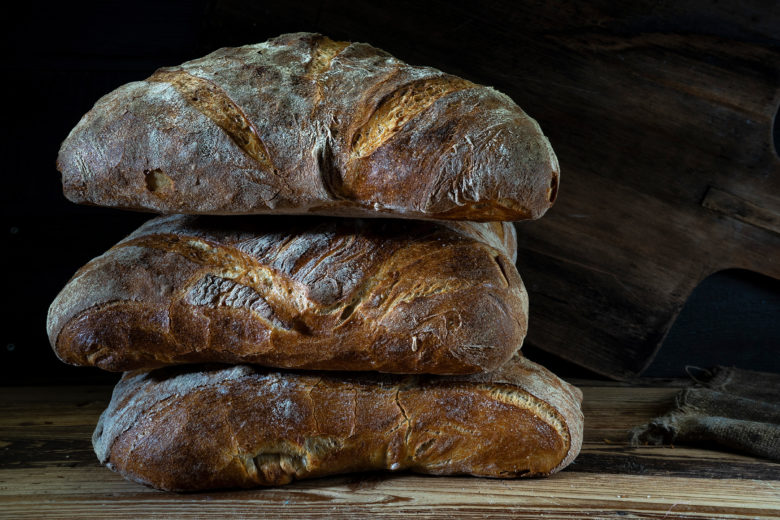 Rustic appearance and taste are right at the very top for this recipe – the secret lies in the simplicity and not with complexity like in some recipes! As simple as possible, no frills and the production process should fit into the daily routine as easily as possible.

For the Les Boules, it starts with a recipe with a flour mixture of standard wheat flour type 700/550 and the French T80. In addition to the main dough, the wheat flour is also used in the wheat pre-dough (Lievito Madre) – this type of flour makes it easier to knead the main dough and at the same time ensures more airy pores. The French T80 from Bongu, on the other hand, is purely responsible for the taste and the result speaks for itself! Of course, you can exchange different flours (whole wheat, …), but the result will never get anywhere near this result.

After production, the dough is folded twice, whereby the dough is immediately placed in the proofing basket after the second fold! Many will ask whether the dough has sufficient stability with such processing methods? In all honesty: I wasn’t too worried about what came out of the oven, the main thing was simple and straightforward!

I’ve been trying for soooo long to get this simplicity of baking bread into the blog and now the time has finally come – it’s a shame that I didn’t start with such recipes earlier.

Conclusion: Reduce the amount of salt, long & cold proof in combination with a strong bake lead to a highly flavored taste experience!

Slowly mix the starter, water, and wheat flour in the mixed for 3-4 minutes. Then allow it to rise for 4-5 hours until it has doubled in volume (depending on the activity level this rise time can vary).

ATTENTION: Before continuing with the main dough, remove 150g of the sourdough as starter and store it in the refrigerator. Only 450g of mature Lievito Madre is used in the recipe!