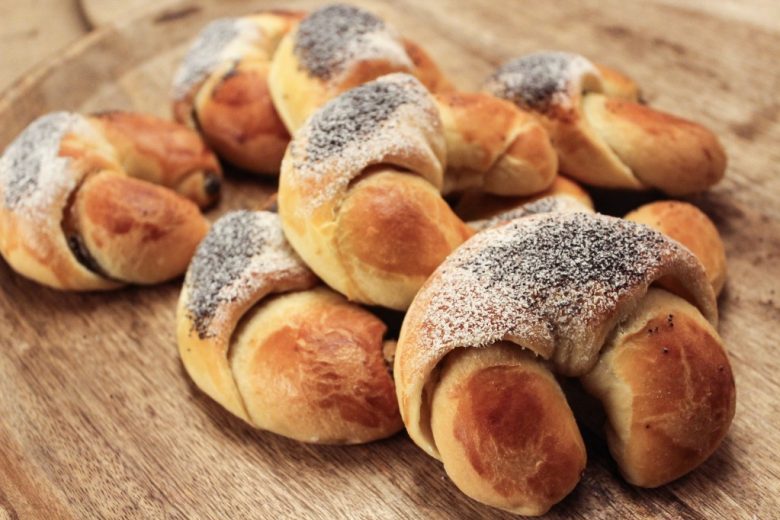 These crescents are a brioche dough pastry. After dividing the dough, the round balls are rolled out into flat oval shapes, which are then filled with a cooked poppy seed mixture. The poppy seed filling should be made the day before (at the same time as the brioche dough) to ensure it has a fine consistency.

For me, the best poppy seed filling is the one that uses the simplest ingredients: poppy seeds (grey poppy seeds), milk, cake crumbs, butter, sugar, egg and a little cinnamon.

To please the taste buds of all my readers, I have included multiple recipes for the poppy seed filling.

Bring the milk and butter to a boil. Then mix in the sugar, poppyseeds, cake crumbs and cinnamon. Only add in the egg once the mixture has cooled completely.

Bring the milk and butter to a boil and mix in the rest of the ingredients, one after the other. Add in the egg once the mixture has cooled completely.

Bring the milk, sugar and cinnamon to a boil. Mix in the poppy seed and semolina and let it continue to cook for a few minutes (stir constantly!!). Mix in the raw marzipan and let the mixture cool. Then mix in the egg whites.