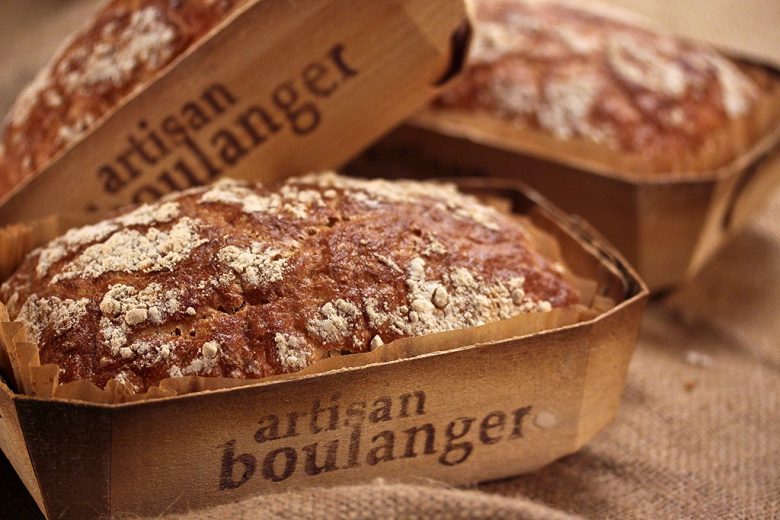 For my next to last recipe about spelt, I opted for a no-knead recipe. Perhaps the special thing about this recipe was the way it proofed, because the bread matured for 12-14 hours at room temperature. The whole recipe does not contain any pre-dough, rather whole ingredients: spelt flour, water, yoghurt, salt and yeast. All ingredients are only mixed by hand until homogenous, or with the mixer for 1 minute on slow speed.

Subsequently the dough rises in a tub, where it is folded 3x each after 30 minutes. As you can see in the following pictures, I started two different experiments!

In the first picture gallery the dough was divided immediately after the folds. The weighed out doughs were formed into rounds and placed in the baking forms. Up until baking these breads proofed for 12 hours at room temperature. The breads were baked with steam for 40 minutes at  250°C reducing to 220°C.

The difference in the second picture gallery was the processing! After the folds, the dough proofed for 14 hours in a covered tub at room temperature. After the 12 hours the dough was divided into 3 equal sized pieces, and loosely formed into round loaves. They were once again proofed with the floured seam-side up, and sent into the oven with strong steam.

The crumb and volume turned out better with the first process!

The taste lends itself to something in the sweeter direction, whereby the toppings of butter and jam would fit. Since this was my first no-knead recipe that I have baked, I can’t make a comparison to any other no-knead recipes.

Mix the dry flour and salt and form a well. Dissolve the yeast in the water and place in the well with the yogurt. Mix briefly until a dough forms but don’t knead it!

Put the dough in a bowl, cover and let it rest. Then the dough is folded 3x (each 30 minutes). At each fold you can observe how the dough, little by little, develops a compact structure.

After the last fold the dough is divided into two equal sized pieces. Now form the dough into rounds and immediately place in the baking form.

In this picture gallery the dough was not worked anymore on the next day! The dough proofed for 12 hours in the baking form and was then immediately baked.

In this picture gallery the dough matured for 12 hours in the tub. After maturing, the dough was divided and formed into loaves. The dough rose with the seam-side up for a second time for about 120-150 minutes before baking.