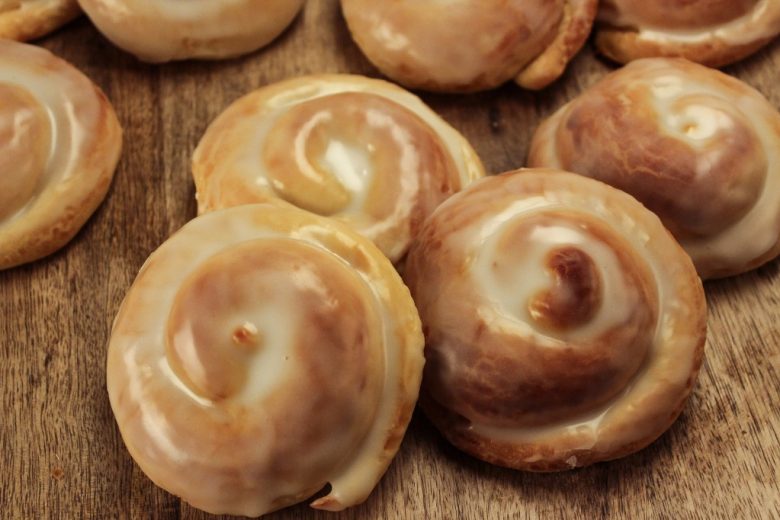 Since I have neglected making pastries, I will alternately publish a pastry in the middle of the week for the next few weeks. Different variations of brioche, fried bread and Danish pastries will sweeten the coming weekends.

The brioche will make the start of the Viennoiserie. In order not to make ten different brioche recipes, I decided on a basic recipe. Here the production is uncomplicated and simple but – what is more important – the taste and the freshness are unbeatable!

Functional properties of the ingredients in yeasted dough:

Wheat flour contains wheat gluten, starch, minerals and fiber. Wheat gluten can be broken down by its own or added enzymes while the dough is maturing. In the first step it becomes more flexible. With a longer exposure time it loses its elasticity, releases the bound water again, the surface begins to shine and it loses its gas retention capacity. With yeast dough, the influence of fat and other proteins on the gluten is more important than the degradation by enzymes.

The addition of up to 20% butter, based on flour, makes the dough more elastic and flexible. If more than 20%, the doughs will be shorter and tear easily when stretched. If additional sugar is added, the dough can be significantly shorter with just 10% fat.

The wheat gluten can also be made more flexible by adding milk and / or whole egg. The reason for this lies in the reaction of the proteins from the milk and the eggs with the gluten.

The starch in the wheat flour absorbs the water from the dough during baking and more or less gelatinizes. High proportions of fat and sugar reduce the proportion of water in the dough and result in very short baked goods because the starch only gelatinizes to a small extent. If the baked goods are too tough, you should increase the butter content.

When to add butter depends on various factors such as the recipe, the amount of butter, the consistency of the dough, the batch size and the type of machine. If the amount of butter exceeds 10%, it is recommended to add it after a mixing time of 3-4 minutes. By delaying the addition of butter, a dry, but at the same time elastic dough structure is achieved.

The butter consistency is an important factor influencing the quality of the baked goods when making dough. In order for the dough to be processed optimally, the butter must be added directly from the refrigerator at a temperature of 5-6 ° C.

Dough structure 20 seconds of mixing time after adding the butter.

Dough structure 20 seconds of mixing time after adding the butter.:

Egg yolks contain significant amounts of fat and there is a relatively large amount of lecithin in them. The lecithin can have an emulsifying effect on dough. In addition to this positive effect on the wheat gluten, the gas retention capacity of the gluten is also improved.

Doughs with whole eggs are easier to stretch and are more pliable. The processing is easier and the fermentation tolerance is better. With the addition of whole eggs or egg yolks, the volume of the yeasted baked goods can be greatly increased and the period of freshness extended. If only egg white is used, the result is more of a straw-like crumb. To increase the tenderness of the crumb, the whole egg or egg yolk content should be increased.

The addition of sugar to a dough always means that the amount of liquid must be reduced. The dough becomes shorter, more pliable, but not fluffy. The dissolved sugar ensures that the yeast’s activity is slowed down. The yeast needs correspondingly longer for sufficient leavening.

The effect of the sugar is strongly dependent on the amount added. Between 2 and 5% based on the amount of flour, there is an increase in volume, at more than 12% the volume of the baked goods decreases significantly and leavening is limited.

Sugar increases the browning of the pastry. They also get crisper, but after a short time they lose their crispness because the sugary crust is thinner. It absorbs moisture from the air more quickly and makes the crust soften after a short time.

The yeast content must be increased accordingly depending on the addition of butter and sugar. Yeast amounts between 5 and 8% based on flour are normal (for me it is 5%).

The salt content is between 1 and 2% based on flour. In some cases, even smaller amounts are suggested. These values are notable because considerable amounts of fat, sugar and fruits are added to these doughs. The salt can be dosed so low because, in addition to the salt, flavor is also added. But there is no reason to stay well below 2%, since the amount of salt stabilizes the gluten and contributes to a clear taste.

For the glaze, stir together the powdered sugar, lemon juice, and water until smooth. Spread the glaze over the baked snails and allow to dry.