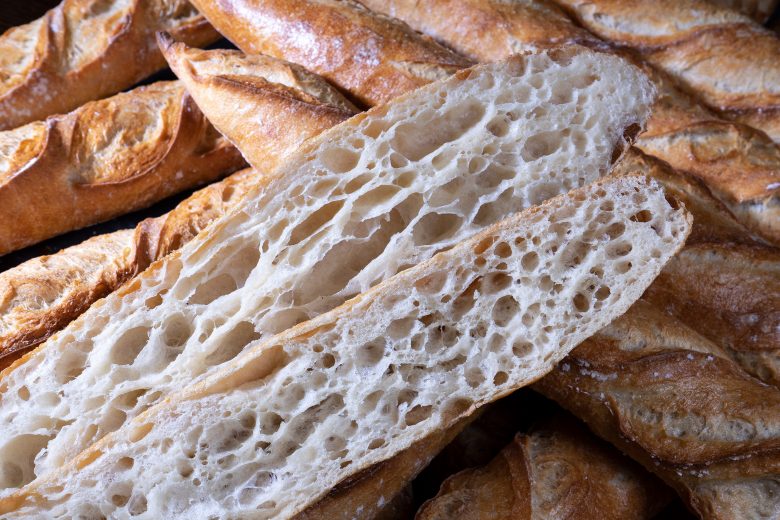 The division of the camps is so wide- the perception of what the best traditional french baguette is and what is sold as a baguette in Germany/Austria; or what is believed to be the best by bakers (professionals & hobby bakers)- that it is impossible to reach an agreement.

In France, a good baguette is celebrated just as a fine German automobile is celebrated by us. It is clearly a cultural asset- there are ongoing competitions, premier bakers supply the presidential mansion (for one year) and their baking fame is set for life.

It simply costs the Bundespresident a weary, diplomatic smile when the first load of Stollen are delivered to Schloss Bellevue from the German Baking trade school. This is not the fault of the Bundespresident since the recipe isn’t all that bad, rather it is optimized for practicality, not necessarily for taste. It’s done so to fit the average, run-of-the-mill German bakery with ingredients that are most widely available.

A high-ranking German chef would give EVERYTHING, get the best, most expensive ingredients, spend nights tinkering with the recipe … improve, revise, improve – as if the Bundespresident were the highest critic to impress. It could be this way.

For us, you are considered a champ when you can take a German Type 550 flour for less than 25 cents/kg and make a dough that can survive a 48 hour fermentation. Then pull a bread stick out of the oven that is full of fermentation aromas.

The world is really up-side down when a German “bread connoisseur” is in front of the camera- seemingly knowledgeable, but arrogant to any Frenchman- to judge the baguette of a proper French baker. The “foreign shame” takes on a new dimension…

Now it is time for the Bread Brothers to concentrate their experiences and document their journeys into French and Parisian bakeries. We should at least mention that we have been in contact with the best of the baking guild.

The French philosophy- to assemble a whole that is better than the sum of the parts- is well known through the French wine-cuvees. Millers also understand this game: the flours are ground together, mixed from various wheat types and regions in order to get the best baking results whether you’re making croissants, baguettes, or a French country bread.

Here the point is hammered home: the German stand-by “550” or Austrian “W700” should be cheap and good for all-purposes. It’s like a VW station wagon competing with an AMG-Mercedes or a Bentley. The VW driver thinks they are driving the best all-around car. It has more room than the Bentley and is not as edgy as the AMG on the autobahn. In addition, it is cheaper.

Here are the typical properties of a French baguette flour:

The greatest technical challenge for a German baker in making a baguette is probably the unfamiliar process of working the dough: the dough is really soft and it needs to be worked gently in order for the open pore structure to remain, yet it has a strong upper crust so that it retains the characteristic shape.

The work-up is done in 2 steps: after the final maturity the dough is turned out onto the work surface gently and done so to keep the same shape. The dough pieces are divided equally and rolled into cylinders with light tension. Rest time in a couche (baker’s linen) of about 20 minutes. Forming into baguettes: apply pressure and roll out long. Further 30-45 minute proof.

The typical French baguette is brought to life by the play of colors on the outside – it should have dark tips and a light orange-yellow color within the crumb color. The helps to set the contoured form. The smell of a fresh baguette is tantalizing, the thin crispy crust- a boulangerie pulls fresh baguettes out of the oven every 2 hours. The crumb is tender, aromatic, slightly chewy- the inside has irregular and open pores. The French are much more tolerant of this than the german Hobby baker. The baking time for a regular dough size of 350g and 50cm long should be 21 minutes. Standard temperature is 250°C. Steaming is important, for a crispy crust release it in the last third of the baking time.

Perhaps it helps to get over some of the German mentality when you start to play with this food: break into the baguette with your hands, tear it open, enjoy a nose full of the fresh crumb aroma…and understand the bread as an accompaniment to other pleasures. Sauces, dipped in spreads, use the good butter a bit more liberally, a few pinches of salt, so what if you eat half of it? Baguette indulgence is anarchy!

We developed two classic recipes which we could sell in France as world-class baguettes. With both variants the outer and inner qualities are there but the taste is of a completely different character; if you look closely there are similar properties in the crumb. The crust is thin and crispy on both.

The sourdough one noticeably keeps fresher, this is in accordance with doctrine. Crisp stays fresh longer. The crumb has a longer strand, thus “chewy”. Light, buttery lactic notes encourage the choice of sturdier accompaniments: terrine, liver spread or aromatic cheeses the combinations elevate the product to something better than on their own. This doesn’t mean that the poolish baguette is worse in any way: the 50% pre-dough content is a ballpark number that gives the best crumb quality as well as taste. One starts in the type of baking with proven recipes, then you extend the fermentation time, at some point you try all sorts of things until you have really pushed the boundaries: failure is allowed. This was just such an – successful- experiment. Of course the poolish delivers more than fermentation- the French flour also helps push the taste in the desired direction during the maturity. The result is milder, yet more complex, aromatic and floral! Lightly sweet, crisp. The first thing to reach for would be honey or jam. Both variations are sensational with Breton salted butter at any time of the day.

Dissolve the starter in water and then mix with the T65 flour until lump-free. Subsequent maturity time of about 8-12 hours. If a longer maturity time for the sourdough is desired, the starter amount must be reduced.

Dissolve the yeast in water, let it stand for 10 minutes, then mix with the wheat and rye flours. Then cover and let the poolish stand at room temperature. As soon as the poolish has increased in volume by 40%, it is stored in the refrigerator at 4°C until ready to use. In the fridge the poolish reaches its full maturity and can be kept for up to 36 hours.