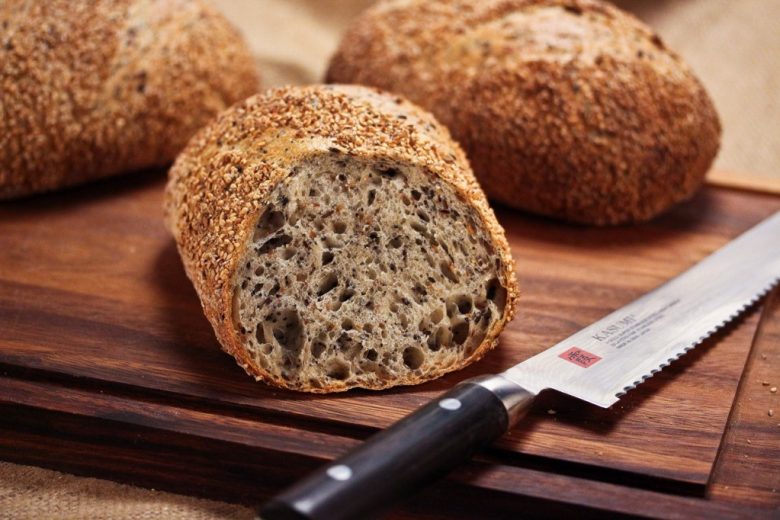 The batard aux grain is a French wheat bread to which a blend of roasted seeds is added. The seed mix is made of sesame, poppy, and flax seeds and is roasted in a 230°C  oven. Before the seeds cool off they are covered in water to form a scald. .

It took me a bit to get used to this French specialty, mostly because I had never added roasted poppy seeds to a bread before. After chewing the bread for a bit a wave of flavors becomes present- from nutty to spicy.

The main dough is prepared with a Poolish, that first ripens for 3 hours at room temperature and then later in the refrigerator for 15 hours.

The specified TA of 190 may shock some, but this is deceiving because of the seed scald

Roast the poppy, sesame, and flax seeds in the oven at  220°C (approx. 8 Minutes), and while still hot cover with the hot water!

The seed scald should be prepared at least 2-3 hours before preparing the dough, otherwise the dough temperature will be too high!

Mix together the poolish, flour and water briefly on slow, and let autolyse for 20 minutes!

After that add the sea salt and yeast and mix for 8 minutes on slow and 2 minutes on fast. At the end the scald is added to the kneaded dough, and only kneaded further until a smooth dough is achieved.

The dough is rested for 90 minutes and during this time, folded 2x after 30 minute intervals.

Now the dough is divided into 4 equal sized pieces and formed into round loaves. After a short relaxation phase (15 minutes) form into batards.

Now the formed batards are coated with water on the upper side and rolled in a strewn mix of sesame seeds and finely sieved rye meal (1:1). Lay in a linen cloth and let proof for 25 minutes.

Before baking use a razor blade to score each loaf two times at a slant.

Bake with strong steam at 250°C reducing to 235°C for about 25 minutes. Let the steam out only after 15 minutes in order to get a nice crust.